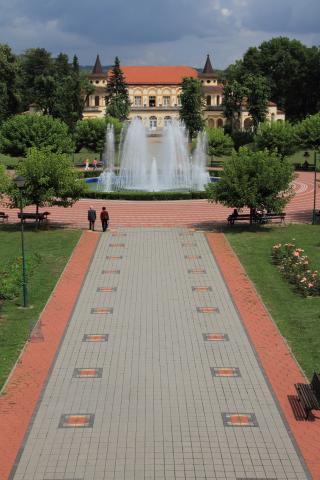 www.banjakoviljaca.rs
Description:
Banja Koviljača spa is located in western Serbia, in the Drina river basin. It lies on the right bank of the river, at the foot of Gučevo mountain, 125 m above sea-level. Banja Koviljača can be reached via the main Ruma-Šabac-Loznica road. The spa is 6 km from Loznica and 142 km from Belgrade. Archeological studies have confirmed that the area around Banja Koviljača was inhabited as early as the Roman era. In the Middle Ages, the people of this area found a spring of medicinal water below the walls of the town of Koviljkin Grad. In the 17th century, wealthy Turks from Mačva and Podrinje came to the spa to recuperate, and in 1720 they built the first female hamam baths. The spa was known by the people as the "Smelly Spa" because of the unpleasant fumes which came from the mud pool, a result of the sulphurous water spring found there. The modern use of the location as a spa resort began with the construction of a sulphur bath in 1907. The sulphurous mineral waters (which range in temperature from 15 to 28°C) and the curative mud are the natural medicinal elements of Banja Koviljača. Treatments are performed in the Banja Koviljača Specialised Rehabilitation Hospital, with the use of hydrotherapy, peloid therapy, magnetotherapy and manual, underwater and vibromassage. In Banja Koviljača the following are treated: - all kinds of rheumatic diseases - post-traumatic conditions - post-operative spinal and post-hip and knee replacement conditions - motor neurone damage - gynaecological diseases (sterility) A special Children's Rehabilitation Department, the first of its kind in Serbia, has been opened in the Specialised Hospital. The spa is surrounded by one of the largest and most beautiful parks in Serbia, suitable for walking and leisure. The famous Kursalon spa ballroom building captivates visitors with its beauty, the rich interior evoking the spirit of bygone times and the opulent balls once held there. The surrounding area of Banja Koviljača is full of cultural and historical attractions. On Cer mountain there are the remains of old towns and fortresses (Kosanin and Trojanov Grad), as well as the Charnel House Memorial (Spomen Kosturnica), and in the spa itself there are the remains of Koviljkin Grad and Gradac monastery. Nearby Banja Koviljača is Tršić, the birth place of Vuk Stefanović Karadžić, with a state-protected ethnic village which shows visitors how life was in Vuk’s day. Also here is Tronoša monastery, which houses the Museum of Vuk’s Early School Life and is where the great man learned to read and write. On the Drina there are managed locations for angling and on Gučevo there are a great many picnic sites. INFO Specijalna bolnica za rehabilitaciju Banja Koviljača Park 4, 15316 Banja Koviljača tel: +381 (0)15 818-270
Audio record: