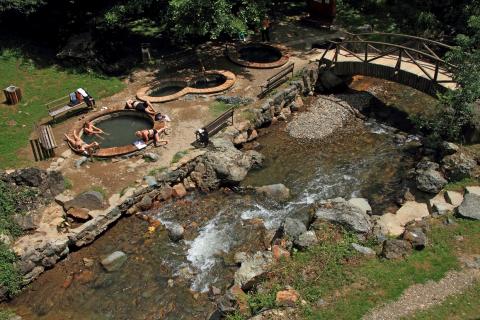 www.lukovskabanja.com
Description:
Lukovska Banja spa is located in southern Serbia, at the base of Kopaonik mountain, at 681 m above sea-level. Lukovska Banja can be reached via the main road through Kuršumlija. It is 35 km from Kuršumlija, 336 km from Belgrade (via Niš) and 55 km from the centre of Kopaonik. Going by the number of thermal mineral water springs (which range in temperature from 56 to 69°C) and their generous flow rate (100 litres a second), Lukovska Banja is one of the richest spas in Serbia. Spa treatments are performed in the medical section of the Kopaonik hotel and include hydrotherapy, electrotherapy, hand massage and peloid mud therapy. In Lukovska Banja the following are treated: - chronic inflammation – rheumatism (rheumatoid arthritis without clinical signs of acute inflammation) - degenerative spinal diseases (osteoarthritis, spondylosis and deformative spondylarthritis, lumboischialgia and periarthritis) - post-injury conditions The subalpine climate lends itself to winter sports, and not far from the hotel there is a recreational ski slope with a 300 m-long ski lift. The Church of the Holy Apostles Peter and Paul is located in Lukovska Banja, and in Štava there is the 17th-century Church of Saint Mina. Of special interest is the tour of a factory which makes hand knotted and hand tufted rugs and folk handicraft items made of local wool and bearing motifs of the Kopaonik area. Guests can also visit Kuršumlija and the Saint Nicholas and Holy Mother of God monasteries , as well as the unique natural phenomenon – Đavolja Varoš (Devil's Town). INFO Zavod za rehabilitaciju “Prolom Banja” PC “Lukovska Banja” 18437 Lukovska Banja tel: +381 (0)27 380-008
Audio record: