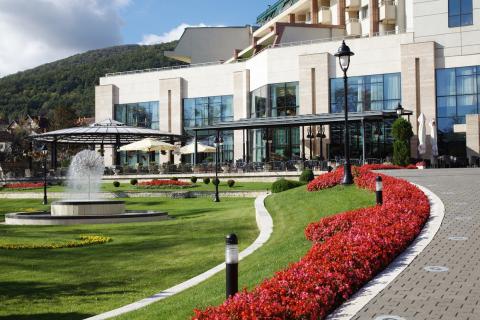 www.bukovickabanja.co.rs
Description:
Bukovička Banja spa is located in Aranđelovac, at the base of the Bukulja mountain. It lies at 256 m above sea-level and is 76 km from Belgrade. Bukovička Banja can be reached by taking the main road from Belgrade via Mladenovac. In 1811, the waters of Bukovička Banja were used to treat Dositej Obradović, and at the request of Prince Miloš, the water was brought from the spa and drunk by him in the palace. In the 1900s, the bottling of Buckovačka mineral water began and is today one of the most well-known bottled mineral waters – Knjaz Miloš. Today, the most up-to-date therapeutic methods are used in the Bukovička Banja Specialised Rehabilitation Hospital, which is located at a site of medicinal waters, mud and favourable climate. The following are treated at Bukovička Banja: - gastrointestinal tract diseases - liver, biliary tract and pancreatic diseases - respiratory diseases - musculoskeletal system diseases and injuries The Specialised Hospital here is the only one in Serbia to have a department for the long-term treatment, education and rehabilitation of children with insulin-dependent forms of diabetes. In the recreation block, besides the standard hydrotherapeutic procedures, there is a whirlpool bath with underwater massage, a solarium, sauna, hydro-kinetic showers, massage showers with adjustable pressure and temperature, mud baths and a fitness centre. Bukovička Banja Park, spread out over an area of 21.5 hectares, is one of the most beautiful in Serbia. The park is geometrically laid out and captivates visitors with its harmony and rich array of plant species. Since 1966, the year the Beli Venčac international sculpture workshop began, Bukovička Banja Park has boasted a unique and growing collection of sculptures. The Marble and Sounds festival is held in the park every year, as is the international World of Ceramics festival. The Old Edifice (Staro Zdanje), which is the oldest building in the park, is today a hotel and the symbol of Aranđelovac. Prince Mihajlo Obrenović started its construction 1865, as a summer residence and assembly building. Pećina Risovača cave, an archaeological site from the late Stone Age and listed monument of nature, is one of the oldest testaments to the existence of humans on the Balkan Peninsula. Risovača has been developed for tourist visits as a kind of Palaeolithic museum. Visitors to Bukovička Banja can visit its Museum which houses numerous archaeological, ethnological and fine art exhibits, representing the culture that developed in this area of Šumadija. Bukovička Banja has exceptional facilities for all kinds of recreational activities and sports training, including sports halls, small and large sports fields, an automated shooting range, an outdoor mineral water swimming pool and an indoor swimming pool in the Izvor hotel. In the park there is a fitness circuit and a marked hiking path leads from the Izvor hotel to Venčac via the Bukulje mountain. The surrounding area of Bukovička Banja contains numerous cultural and historical monuments: Karađorđe’s Fortified Town (Karađorđev Grad) in Topola, the St George Church (Crkva Svetog Đorđa) in Oplenac, and Orašac – the place where the First Serbian Uprising began in 1804. The adjacent hunting grounds are full of small game and the artificial Garaši lake offers opportunities for angling. INFO Specijalna bolnica za rehabilitaciju "Bukovička Banja" Mišarska bb, 34300 Aranđelovac tel: +381 (0)34 725-250, fax. 724-186
Audio record: