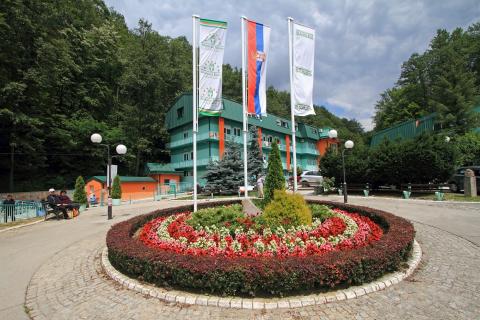 www.gornjatrepca.rs
Description:
The Banja Gornja Trepča spa, which is also known as the Atomic Spa (Atomska Banja), is located in the settlement of Gornja Trepča, in the southwest of the Šumadija region, beside the Ibar Highway (Ibarska Magistrala). It is 18 km from Čačak and 150 km from Belgrade. It sits on the forest-covered slopes of the Vujan and Bukovik mountains, at 460 m above sea-level. The climate of the spa is moderate continental with small variations in annual temperature because of the rich plant coverage. The lightly radioactive 30°C thermal mineral water is abundant in microelements such as rubidium, caesium, selenium, silver and strontium, amongst others, which have active biological effects on the human body. Treatment is performed under the constant supervision of specialist doctors. The resort offers the full range of spa therapy treatments. Physical treatment involves the use of electrotherapy, kinesiotherapy and manual massage, while spa therapy involves bathing in pools and baths and hydro-massage. Heated curative mud packs are applied for 30 minutes at a time. In Banja Gornja Trepča the following are treated: - rheumatic diseases (chronic inflammatory rheumatism, Bekhterev’s disease and rheumatoid arthritis) - degenerative rheumatism (arthritis, spondylosis and spondyloarthritis, inter-vertebral disc disorders) - extra-articular rheumatism (myofibrositis, fibrositis, panniculitis, tendonitis, bursitis and psychogenic rheumatism) - neurological or psychiatric disorders (multiple sclerosis, post-myelitis and encephalomyelitis recovery conditions, adhesive spinal arachnoiditis, postrheumatic myelophathy, - ---- cerebral palsy, neurosis, neurasthenia, dystonia and depressive conditions) - gastrointestinal tract diseases (chronic gastritis and duodenitis, uncomplicated gastric and duodenal ulcers) - diseases of the peripheral blood vessels (chronic peripheral artery disease and chronic venous oedema) It has been shown that drinking the spa water leads to the stabilisation of sugar levels in diabetics. Banja Gornja Trepča is unique because it is the only spa in the world to help multiple sclerosis suffers in hindering the progression of the disease, and even experience partial recovery. There a many cultural and historical attractions and picnic sites in the surrounding area. The Church of the Holy Mother of God, built in 1894, stands in the centre of the spa and is under state protection. Guests can also visit the 14th-century Vujan monastery and the monasteries of the Ovčarsko-Kablarska Klisura gorge. Many cultural and tourist events are held during summer in Gornja Trepča, the most notable being Days of Health and Days of Plums. Also, the village of Prislonica is the location of the famous Festival of Pipers. Within the immediate surroundings of the spa there is an inviting hunting ground, teeming with small game and wildfowl. INFO Atomska Banja Gornja Trepča Blagoja Paunovića bb, 32215 Gornja Trepča tel: +381 (0)32 822-063, fax: 822-382
Audio record: