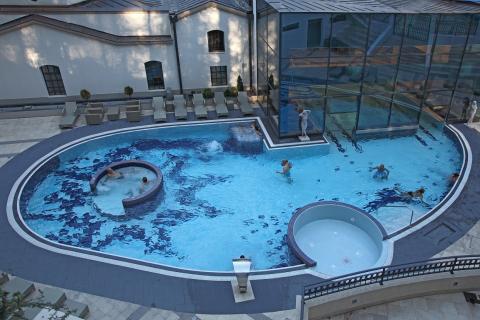 Description:
Ribarska Banja spa is located in central Serbia, on the slopes of Jastrebac mountain, in the Ribarska Reka river basin. Ribarska Banja lies at an altitude of 540 m above sea-level and is 35 km from Kruševac. Ribarska Banja can be reached by taking the Belgrade-Niš highway via Kruševac. Archaeological findings have shown that there was a health resort here as far back as the time of the Ancient Romans and that after the Turkish period it remained a hamam bath which, with some changes, operated up until recent times. Large pavilions for the sick were erected prior to the First World War and new buildings with therapeutic facilities were built after the Second World War. There are six mineral water springs in Ribarska Banja, ranging in temperature from 38 to 42°C, which are classed as homeothermal and hyperthermal. Ribarska Banja has a mountain foothill climate and because of the dense forests and clean air, the spa has the makings of a health resort famed not just for its water but its air too. Treatments are administered in the Ribarska Banja Specialized Rehabilitation Hospital which is equipped with the latest medical equipment. Besides kinesiotherapy, treatment also includes electrotherapy, occupational therapy and bathing in indoor thermal mineral water pools. The following are treated in Ribarska Banja: - conditions following broken bones and bone operations - all forms of rheumatism (inflammatory, degenerative and extra-articular) - joint contractures - spinal column deformities - post-traumatic and postoperative paresis and nerve paresis - hemiplaegia - hemiparesis Ribarska Banja has a hall in which a diverse range of cultural and entertainment events are held. The surrounding area of Ribarska Banja is suitable for walking and spa guests can also go on organised excursions to the town of Kruševac and the Naupara and Veluća monasteries, as well as the Jastrebac mountain centre, which is excellent for winter sports.
Audio record: