Nature in Bosnia and Herzegovina/Bosna i Hercegovina – E75
Photographies: 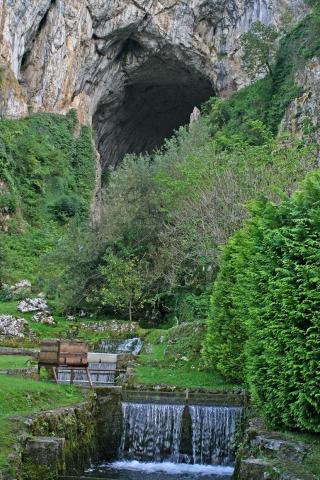 Description:
The Cave of Potpeće is located in the village of Potpeće, 14 km to the southeast of Užice. It is unique for its monumental entrance in the shape of a horseshoe. The entrance is 50 m high, the width of the base is 12 m, and under the arch – 22 m. This is the biggest cave entrance in Serbia. It was hollowed on a limestone cliff, whose vertical part is 72 m high. The 555 m of the cave have been researched and arranged for visitors. The entrance-descending path has more than 700 stairs. The Cave of Potpeće is classified as a cave of the spring type. It was created by the waters of the sinkhole rivers which sink in Drežnička Valley, and after running beneath the earth, they emerge from the cave or the spring in front of the cave, thus creating the cave river of Petnica. According to its geological composition, the Cave of Potpeće is composed of middle-Triassic limestone of a whitish color and a fine mosaic structure, and is characterized by fracture porosity. In the Cave of Potpeće, the cave channels are at two levels: the older – the Upper Cave, and the younger – the Lower Cave. The entrance channel was made by the destruction of the interfloor construction and their merging and is common for both horizons. The cave is rich in cave ornaments considered as very rare in limestone caves. According to its morphological-hydrographic evolution, there are three groups of channels in the Cave of Potpeće: the fossil (the Upper Cave), the periodically active (a longer segment of the Lower Cave) and the permanently active (the latest underground flow). The middle annual temperature of the air is 9.5°C. The temperature reaches its maximum in July and its minimum in January. The Cave is supposed to have been man’s habitat as early as in the Neolith. In the cave, the archaeological remains, such as ceramics, the treated deer’s horns and flint-stone tools have been found.