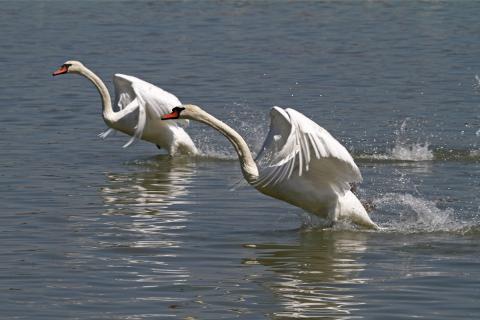 Description:
Great by fate. On the upper course of the rivers have always been determined Danube in Vojvodina, within the river’s ﬂood zones, a network of meanders, oxbow channels, river islands and banks sprawl the Upper Danube river basin region. Imagaine an isolated island surrounded by felds and villages, the area continues to preserve and nurture an extremely large number of plant and animal species. Among the most important and valued residents of the Upper Danube basin are the White-tailed Eagle, Black Stork and various species of freshwater fsh that fnd ideal conditions for spawning in the warm shallows and backwaters of the river. You can also fnd rare and endangered mammals, such as otters and wildcats. Additionally, there is also one of the last populations of European Roe Deer to be found in its natural, fen environment. Te area oﬀers favourable conditions to support the lives of more than 280 species of birds, primarily marsh wading birds, as well as a number of cormorants, herons, ducks, geese, gulls and terns. Te entire area is intersected by Danube channels, ponds, swamps and large reed beds. Te low-lying areas are home to vast, sprawling meadows of high windﬂower, while the water is covered with white and yellow water lilies and Water Caltrop. Rare species of plants also grow in abundance here, such as the Water Violet, Common Mare's tail, Common Water-crowfoot, Siberian Iris and Lady Orchid. Te Upper Danube basin region is home to the Black Hawthorn, while the towering Black Poplar is also an interesting sight as it reaches some 40 metres up. Tis fen area is a thriving location for oak and linden trees, in addition to providing a home for fen deer.