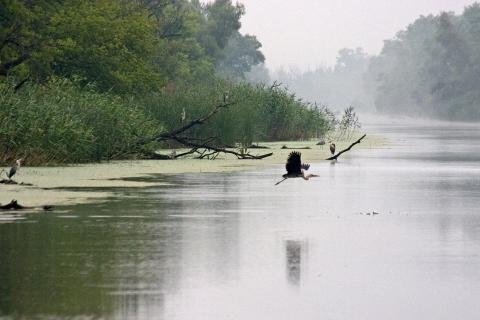 Description:
Carska its title thanks to the various rulers of the Bara, the Imperial Swamp, earned past who have visited it, among them AustroHungarian Archduke Franz Ferdinand and Serbian King Aleksandar Karadjordjevic. Te richness of ﬂora and fauna, diversity of habitats (wetlands, forests and meadows), and particularly the presence of a truly vast number of diﬀerent bird species, have all helped to see this area classifed as the Stari Begej Carska Bara Special Nature Reserve. Te Reserve’s website oﬀers an interesting introduction: “If we were to draw a straight line on a map of Serbia between Belgrade, Novi Sad and Zrenjanin, we would fnd a blue area of irregular shapes very close to the geometric centre of the resulting triangle. Of course, this is a way of cartographically denoting water surfaces. Indeed, somewhere in the centre between the three cities lies a spacious and clean blue mirror decorated with a narrow strip of cane and reeds, steppe and willow groves. Tis is the imperial swamp.“ Tis well known meeting place for birds lies between the rivers Tisa and Begej. ” Today the nature reserve area is dominated by the wetland habitats of Tiganjica, Imperial Swamp and Perleska Swamp, with the oxbow of the Old Begej. Te special natural value of this area is represented by its impressive bird colonies, covering about 250 species – 140 of which are year-round residents and 110 migratory, making this one of Europe’s most important ornithological centres. As an important pit stop on the route of migratory birds, some species spend barely ten days at the reserve, while some, like wild geese from Siberia, spend the entire winter. All eight European species of heron nest here, which is why the heron has become the reserve’s trademark. Tis rich and diverse colony of birds also includes many pelicans, White-tailed eagles, Western Marsh-harriers, Montagu's harriers and cormorants.Some rare and protected species of plants have also found their home among the habitats of the mosaic layout of forest, meadow, steppe and marsh vegetation. Tese include the White waterlily, Cirsium brachycephalum thistle, Common Mare’s Tail, Yellow iris, Yellow Pheasant’s Eye, Early Marsh orchid. Interesting insects have found an ideal home among the willows, poplars, ash, wild roses and bramble bushes: dragonﬂy, water skater, the lesser stag beetle, musk beetle and ladybird, while the rare mammals resident here include endangered species such as otters and wildcats. Te reptile world is represented by the European marsh terrapin, Water snake, Meadow lizard and the Aesculapian Snake. Te parts of the reserve that are permanently under water and the areas that occasionally ﬂood, represent vast areas for the natural reproduction of fsh, which come here to spawn and feed in the Old Begej. Fish life is rich and diverse here, with as many as 20 fsh species from seven families, including pike, perch, carp, roach and bream.Te reserve is also home to fsh that are listed as of natural rarities in Vojvodina. One such species is the European Bitterling, whose presence is a natural indicator of high water quality. Te variety of natural phenomena, wealth of species and ecological processes, coupled with scenery of incredible and unusual beauty of naturally painted watercolours, represent the backbone of the tourist oﬀer of the Imperial Swamp.
Audio record: