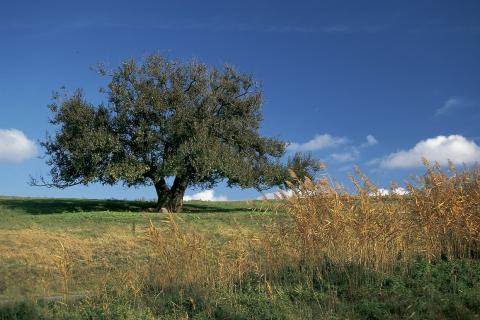 www.deliblatskapescara.rs
Description:
The largest continental desert in Europe, Deliblato Sands is also known as the European Sahara. This special, uncommon area has vast deposits of sand, with sand dunes averaging a height of 70 to 200 metres, and covers an area of 35,000 hectares. Deliblato Sands is located in southern Banat. Thanks to its origin, climate, specific plant life and wildlife, which offer a constantly changing palette of colourful flowers and leaves, this is a unique and beautiful landscape. Entering the world of the sand dunes is like entering a prehistoric site that tells the story of the origins of the world.Over eons, specific environmental conditions have spawned distinctive steppe vegetation and rare plant species, such as the Banat peony, Feather Grass and the Dwarf everlast. About 40 of Deliblato Sands’ plant species are considered natural rarities. This semi-desert area was originally a forest-steppe landscape, while today’s environment has been significantly shaped by human intervention. The planting of foreign species of trees began at the Deliblato Sands during the time of Austro-Hungarian Empress Maria Theresa, while today more than 60 per cent of its area is covered by these plantations. The most common are the Black locust and white and black pine. Among the area’s rare animal species are: desert ants, antlions, Saker falcon, Southern Birch Mouse, European ground squirrel, Lesser mole rat, European polecat and others. For some of these species, Deliblato Sands represents their only, or one of their only, remaining habitats in Serbia. The reserve is also a specific and vital habitat for the wolf population of Vojvodina. Wolves live in a pack led by an alpha male and female. Only they mate and the whole pack is obliged to take care of their offspring. The wolf was declared a pest in the literature of the late 19th and early 20th centuries, while the entire 19th century was marked by an organised hunt of wolves that led them to the brink of being eradicated. It is estimated that Deliblato Sands is home to around 40 Banat wolves (Canis lupus L). This protected natural reserve also includes the Labudovo okno area, part of the Danube with fenland and river islands, which is home to many rare species of nesting birds. The waters are rich in fish and, because the fact that the reserve provides a winter habitat for a great many water birds, the whole area has been declared an international Important Bird Area (IBA). This is the nesting place of the Little egret, Squacco Heron, Ibis and Sand martin. The Pygmy Cormorant – universally threatened species in Serbia – has a stable nesting area here. The Sand martin is a special attraction, as it bores holes in the entire stretch of sand banks, forming unusually interesting shapes. Here the sandy banks of the Danube host Europe’s largest colony of sand martins, with about 15,000 pairs. The Sands are characterised by large fluctuations, day-night and summer-winter, of air temperature, amplitude and surface soil. The Kosava is the predominant wind, which often blows at hurricane speeds of up to 180 km per hour. The natural characteristics and uniqueness of this region make Deliblato Sands suitable for different types of recreation. Devojacki Bunar (Girl’s Well) is a popular resort, offering well tended sports fields, an outdoor swimming pool, walking trails and a log cabin church unique in Vojvodina, dedicated Ognjena Marija (Fiery Mary). The experience of the Sands is completed by organised activities such as horse riding in the dunes, photo safaris or a horse & cart ride.