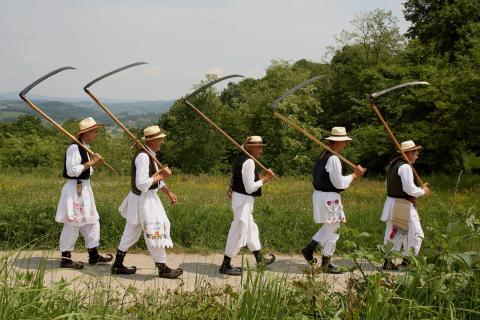 Description:
Many will tell you that Rajac is the most accessible and most beautiful mountain in the vicinity of Belgrade. A relatively easy climb to the peak of the same name (848m), it is even possible for those who aren’t super fit and as a reward you are offered a view that is certainly worthy of a frame. This is because as you stand atop Rajac, you will find yourself in line with the peaks of Suvobor, Maljen, Fruska Gora, Avala, Kosmaj, Bukulja, Rudnik, Goc, Kopaonik, Golija, Ovcar, Kablar, Zlatibor - you cannot escape the impression that you are on top of the lofty and serene roof of the world. History tells us that it was here that one of the crucial battles of World War One – the Battle of Kolubara – was fought. This evokes a special emotion if you the visible trenches dug by the Serbian army in November 1914. Rajac has always had its admirers among lovers of nature. The broad horizon shows a number of meadows and clearings, forests of beech, oak, birch, ash, Turkey oak and, in the highest zone, conifer, fir and pine resembling a tame green oasis. Through the middle of the forest, the slopes of the mountain are traversed by paths with bubbling clear, clean streams and brooks. Water springs are unusually frequent and carry the names of those who plumbed them into fountains. And the water, if such a thing can be said for water, is very tasty. On the heavenly meadows grow a large number of medicinal plants, while the forests are home to pheasant, roe deer, fox, wild boar, hare and tortoise.