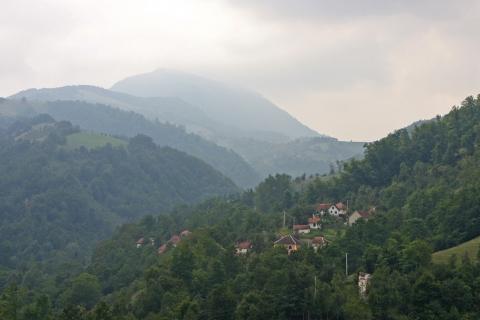 Description:
Medvednik mountain (1247 m) is located in the center of the mountain wreath which from the Drina river in the west, via Gučevo, Bornja, Jagodnja and Sokolska mountains, continues into Orovička mountain, the highest Povlen, Maljen with Divčibare, and end with Suvobor and Rajac in the east. From the Proslop fold above the small town of Pecka to the village of Jovanje and the access to Valjevo, Medvednik covers the total territory of 367 km2, and by climbing the narrower, highest positioned area with a characteristic beam, which is 5 km long, the visitor is led towards the peak of the mountain, with an extraordinary belvedere. The fact that Medvednik is rich in forests does not only provide it with fresh air but also with the large amounts of water, so here is the catchment of the river flows of the Kolubara and the Drina. In the east, the rivers Obnica and Jablanica, the constituents of the Kolubara, spring. On the northern slopes, there is Jadar spring, which flows into the Drina. The small river Zavošnica, meandering around the mountain from the three sides and “stealing” water from one basin only to direct it towards the other, cutting the limestone ridge Vojin’s Rock or the Canvas, 300 m high, is a special attraction. After the 10 km long flow with a big descent, full of gorges, waterfalls, rapids, it flows into the Ljuboviđa, a tributary of the Drina, near the Green Whirl. It is an excellent tour for those who really like walking. It is clear that, first of all, Medvednik is attractive for its clean, preserved nature, the abundance of the forests with good yields of delicious mushrooms and meadows with a lot of small strawberries and medicinal herbs. In the vicinity of Medvednik, you must visit the monastery of Pustinja (Desert) (14th century) and see the painting of the monastery, and the ethno-village of Bebića Luka, with the real pearls of folk architecture. The Home on Medvednik (810 m) opened its door in 1981, and since then, year after year, it has been operating increasingly better in all seasons. It has the capacity of 50 beds, evenly distributed in neat and tidy two-, four-, six- and eight-bed rooms, with a pleasant view of the interesting landscapes. The bathrooms and the toilettes are on the first floor, and on the ground floor, there are an adequate dining-room and a TV room. In the last years, the event entitled “The Days of the Mushrooms of the Mountains of Valjevo” has been organized at the Medvednik Home in the month of October.