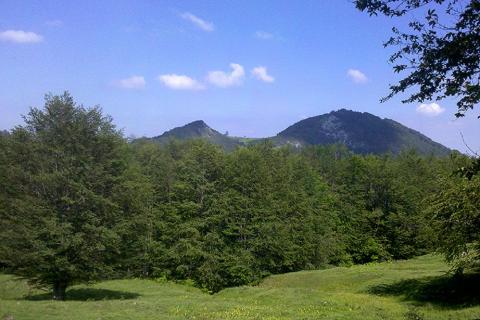 Description:
Povlen is the most visible and the biggest massif in the chain of the mountains of Valjevo. It is half an hour away by car from Valjevo, on the road to Bajina Bašta. The other road to the slopes and cliffs of Povlen leads by the known monasteries of Ćelije (Cells) and Lelić. This mountain of the Dinaric line of extension consists of the two parts of somewhat inappropriate names – Small Povlen and Big Povlen. The inappropriateness reflects in the fact that Small Povlen (1347 m) is higher than Big Povlen (1271 m) and is the highest point of the whole of the mountains of Valjevo. They both lie southwestwards from Valjevo, and westwards from Magleš and Bukovo. From where they are, the direction of the extension of the mountains of Valjevo changes: instead of being parallel , they (Povlen, Jablanik, Medvednik, Sokolska mountain, Jagodna and Gučevo) take the Dinaric direction, with the exception of Boranja, which extends in the southwest-northeast direction. Small Povlen is asymmetrical to some extent – its southwestern side is more precipitous than the northeastern. It is surely the consequence of the cutting of the deep and gorge-like valley, as well as the splitting up along its southwestern side. The ridge of Small Povlen itself is relatively narrow, but does not represent an extremely rocky wreath – it rather consists of the gentle hillocks, between which several shallow karst valleys are cut. In the space of the White Waters, Small Povlen descends towards the south in the cascading limestone cutoffs. From the White Waters to the Red Hill, the space of Small Povlen is for the biggest part built from serpentine. The northern part of the piedmont area of Small Povlen and Big Povlen is dissected by numerous water flows, but its sides are quite mildly precipitous. The reason for this lies in the fact that serpentine dominates over limestone. On the whole of the northern piedmont area of Povlen, there are numerous surface streams that form the densest network of rivers throughout this mountain. On the other side of the mountain, from Debelo brdo hill to Mravinjac, there is an almost continual forest of deciduous trees (beech, hazelnut tree, white beech and sycamore, here and there). Only around Dijavica can you come across the dense forests of relatively young conifer trees (firs and spruces), which have probably been planted. In the late 1970s, a solid macadam road, quite significant for the overall economic exploitation of the northern piedmont area of the mountain, was cut through this forest complex: for the exploitation of the forest, indirectly for livestock breeding and agriculture in a broader sense, and also for tourism purposes, since vacation houses are being built on the both ends of the road. As the fold and the catchment between the Drina and the Kolubara rivers and as the crossroads of the macadam and asphalt roads Valjevo-Rogatica-Užice, as the fold between Big Povlen and Jablanik, Debelo brdo hill is slowly becoming a tourist center with a popular mountain home, numerous vacation houses and an inn. The northern and the southern piedmont areas of Povlen are importantly different in their nature as well as the basic anthropogeographical characteristics. The southern piedmont area consists of mainly water maintainable rocks, which preconditioned the emergence of the sources, the creation of a relatively dense network of water flows, dense forests and the loose clay cover suitable for growing diverse plant cultures. The northern piedmont area is mainly built from limestone, so it is waterless, dissected by surface and underground karst forms, less fertile and more rarely inhabited; on the other hand, it is the place where there are several shrines, monuments, crypts and the famous monasteries of Ćelije (Cells), Lelić and Pustinja (Desert).