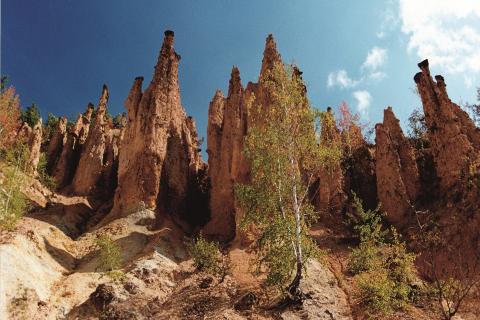 Description:
Southern Serbia is known for its mineral and thermal waters, which is why one large area of this region is known as Toplica (Hot spa). In the extreme south of Toplica, on the slopes of Mount Radan, there are springs of high mineral content that have no vegetation whatsoever in their immediate vicinity. Wherever there is no vegetation, erosion occurs, and erosion always creates interesting landscapes. Upon first seeing the peculiar rock formation known as Devil’s Town, Dragan Bosnic, photographer and writer, said of his impressions: “On the bare slopes, over an unimaginably long period of time, wind, rain and flash floods have created spirals of loose land. Some devilish dance of loose earth also revealed tough Andesitic plates. These pressed the heavy soil under them and denied the erosive forces. Time passed and these strange pillars slowly grew. People long since avoided these spooky ancient columns and, unable to explain their origins, they created legends. According to one of them, two columns are grooms after the same girl. It is interesting that, when looking at the scene from the nearby hills, you can really see two stone columns. The villagers claim that the spooky columns move, which is partly true. When the heavy Andesitic plates occasionally fall from the petrified pyramids, rain and wind wash away those pyramids without caps and a new figure is created on the area where the cap fell. Of course, this is a process that far exceeds a human lifetime.” The water that washes the vegetation from the slopes is red from its high iron content, but is also highly alkaline and cannot be used for drinking. Locals, and increasingly tourists too, come to take this water because it is supposedly good for the skin and for gargling. To the medieval Sasi miners the red water was an indication that there were substantial iron reserves nearby and the remains of two old mines are still visible next to the stream. Today the mines have long gone; dark forces do not scare the people and Devil's Town has become an interesting tourist destination.
Audio record: