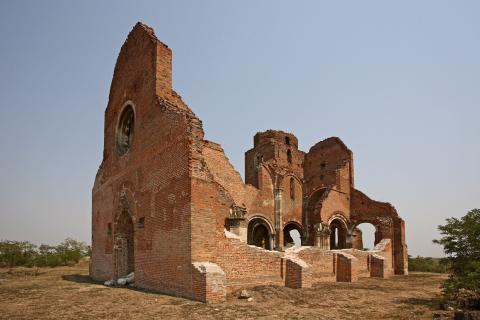 Description:
The historical sources provide no reliable data about the time when the Church of St. Archangel Michael was built, except for the data telling us that in the early 18th century, once the Turks had left Banat, the ruins of the church remained. This imposing construction is located not far away from Novo Miloševo (former Beodra), in the municipality of Novi Bečej. Its basis, as well as its spatial structure, characteristic of Benedictine churches in the transitional variance of the Romanesque-Gothic style (semi-circular, gently broken arches and narrow, semi-circularly finished windows) implies a possibility that the construction of the church began in the late 12th or in the early 13th century. In the late 14th century, the Gothic bell tower was added to the church. The rich architectural decoration on the façades in the shape of the blind arcades, the pilasters, the colonnettes and the large rosette on the western façade has been preserved in fragments. During the excavation conducted in the 19th century, a sepulchral slab with the representation of saints, decorated with the intertwining strip consisting of three elements, which is dated back in the 11th century, was discovered. The archaeological research studies of a more recent date have confirmed that there were residences on the northern side of the church.