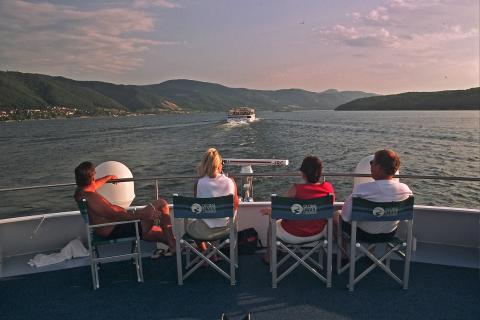 Description:
The Danube is a powerful river, whose 2783km long flow connects ten countries. It also connects the inhabitants of the Danube - people of different languages and of different religions. By this river, settlements have been built for centuries, and it cannot be described without mentioning stories about people living in the fold of the river. The Danube flows through Serbia in the length from the 1433rd to the 845th river kilometer. The waterway, part of the European traffic corridor 7, is 588 km long. The Danube flows through the first part, from Bezdan to Ram, as a typical Pannonian river, then carves the 100km long Gorge of Djerdap, and afterwards peacefully continue to flow and, once it is joined by the Timok tributary, leave Serbia. People of Apatin say that the Danube is the main street of Europe and add to it (*as a joke) that Apatin is its capital town because it is situated at exactly halfway from its source to its confluence. Their beach is distinguished by the most contemporary marina. The center for sailing, sports fields, Banja Junaković Spa etc. are available to you. The charm of the city of Novi Sad has been modelled by many nation and its position on the Danube. The city, the second biggest one in Serbia, is connected by a bridge with Petrovaradin (Gibraltar on the Danube), where the Fortress of Petrovaradin is located, in which fort there are a museum and numerous art ateliers. Every year in July, the Exit Festival takes place here.