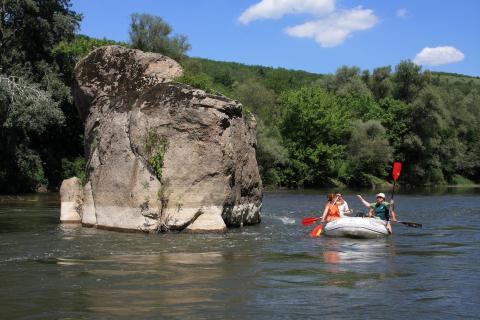 Description:
Praised in songs, paid respect to... the river can be whimsical and so high to flood fields, whereas in a lot of places it can be cross on foot with ease. When the Toplica river flows into it, it then has up to 100m in width. Rarely does it flood the towns. The river first pays a visit to the town of Vranje, and, as if it had taken with itself a litlle bit of their southern temperament, the river cuts in the long and deep Grdelička Gorge. In Vladičin Han, it flows through the small town. This is where sports fields and swimming-pools have been built on its bank. In Leskovac, the river expands into fertile fields, and nearby Aleksinac, it becomes angry because there are no longer watermills as before, and between the mountains, it carves a long gorge all the way to Stalać. This space around Mojsinjska Mount used to be important for the capital in Kruševac in the time of Prince Lazar, in 14th century. The Dungeon Donjon Tower is the only one part of the mediaeval for that has remained visible today. It was named after Duke Prijezda to remind us of the legend of the last defender of Stalać, who jumped into the Morava river when he found himself unable to defend the town against the Turks.