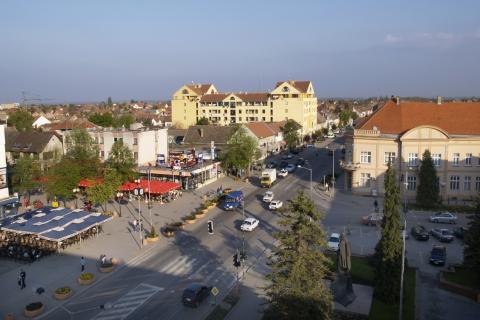 www.indjija-tourism.com
Description:
Inđija is a municipality with the river Danube running through 27 kilometers in length. People call it the heart of Srem. It is situated 42 kilometers away of Belgrade, and regarding the fact that Belgrade and Novi Sad are rapidly expanding, some considered it to be the suburb of both metropolis. Yet, besides the fact that it has everything needed to develop in a modern town, Inđija has its special Srem story. The urban core of Inđija dates from the end of 19th and beginning of 20th century, from the period of industrial development and colonization. In the urban core the distinguishing facilities are the building of today’s Assembly, the House of Vojinović family, roman-catholic church Crkva Sv. Petra (St. Peter), orthodox church Crkva Vavedenje Presvete Bogorodice (Presentation of Theotokos), but also typical urban houses with street fasades of classicism and neo-renaissance. There is also completely new pedestrian zone gladly visited by young people there. As its cultural heritage, Stari Slankamen has the oldest church in Srem – the orthodox church of St Nicholas built in 1468, after which the rest of the churches in Srem had been built, there is also a spa with salty water springs having been known in the Roman period as well, and the remains of the Fortress Acuminicum from Celtic period. Not far from Inđija, there is a rural settlement Маradik that offers to tourists a real opportunity to learn about the tradition of this part of Srem. The touristic values of Inđija are popular ethno-house in this place with over 200 exhibits as well as a real ethno restaurant. The municipality of Inđija, also has a tradition in production of grapes and vine. Every March, the Fair of Vojvodina'a vines is held. May in Inđija is the time for Sremska potkovica (Srem's horse shoe), a competition of many horse breeders compiting in buggy driving - from one-horse carriage to seven-horse carriage ride.