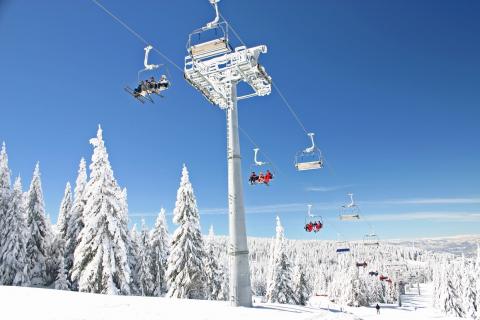 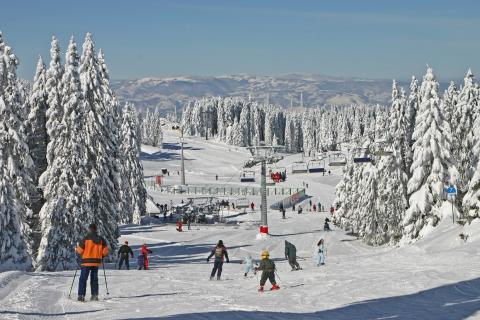 Description:
Kopaonik, a mountain of immensebeauty, owes its name – meaning placeof prospecting – to the great mineral wealth trapped in her bosom. Humans have long since mined iron ore, lead and zinc from the heart of the mountain. Volcanic activity and hot melted minerals of high temperatures and heavy pressure shaped the “Kopaonik mining region” along with reserves of rare metals such as silver and gold, as well as rare minerals like wollastonite and fluorite. Kopaonik is the largest mountain massif in Serbia, stretching a length of 80 kilometres and reaching a girth of up to 40 kilometres in the middle. Kopaonik has some of the country’s highest mountain peaks: Pancic Peak (2,017 m), home to the mausoleum of Pancic, Karaman (1,934 m) and Gobelja (1,834 m), which is why Kopaonik also has the nickname – ‘the Roof of Serbia’. Another popular nickname that stands out for this massif is ‘The Mountain of Sun’as the sky over the peaks of Kopaonik, the sky is clear for an average of 200 days a year. The mountain massif has alternating sharp peaks, gentle meadows, valleys, and mixed deciduous and evergreen forests ... Because of its relatively low annual precipitation levels, Kopaonik is not a source of major rivers, but because of this there is a dense network of small streams, which originate from various sources across the surface of the mountain, some of which have medicinal properties, with increased radioactivity and water mineralisation. The most famous springs in Kopaonik are: Marina water, Krcmar water, Pajino preslo, Sycamore fountain, Kaznovske bacije. Along the course of the Samokovsk River, Kopaonik’s biggest water artery, small waterfalls and rapids form, while the Zaplaninska River includes the cascading Jelovarnik waterfall. The area also has several lakes, with the largest being Semetes Lake. In the vicinity of Kopaonik there are also spas, which only serve to confirm the excellent healing qualities of the mountain itself. The best known spas are Josanicka, Lukovska and Kursumlija. There are organised hiking tours; picnic areas such as Metodje, Kadijevac, Djordjov Bridge; monastery tours – around the medieval monasteries and shrines of the region: Studenica, Sopocani, Djurdjevi pillars, Gradac; wine tours – around Aleksandrovacka Parish, known for its good wine and brandy; rafting on the River Ibar - with a tour of the medieval city of Maglic. Although primarily developed as a winter centre, a permanent enrichment of activities ensures that the season here lasts year-round. One of the local treats worth sampling on a visit is the delicious local blueberry conserve, which you will be offered by residents of nearby villages – or alternatively, when in season, embark on your own harvest.
Audio record: