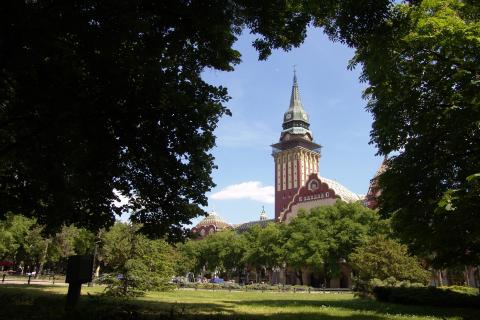 www.visitsubotica.rs
Description:
Subotica is the place where the railway connecting Belgrade, Novi Sad and Budapest is passing through. This town has a great communication with the north as well as the south. The European highway Е 75 is in the vicinity of the urban part of the town. It is 180 kilometres away from Belgrade. The modern center of the northern Vojvodina is a real museum city. The most representative buildings are the Sinagogue (1902), City Hall (1908) Rajhl Palace (1904) and the building of the Town Library (1894). The City Hall designed by the architects Комоr and Jakab, is the largest one in Vojvodina. In the place of the former, old and overaged one, people in Subotica built a new one. It took them two years to finish the interior decoration. The Sinagogue of Subotica is, on the other side, one of the first buildings where the concrete and steel structures were used. Subotica got the building of its National Theatre in the middle of the 19th century. The building is built in Neo-Classical style with characteristic colonnades of six columns at front. However, the first plays in Subotica were performed in 1747. Today, the Theatre in Subotica performs dramas in Serbian and Hungarian language. A lot of buildings in the center of Subotica are decorated with Žolnaj ceramics which this town is recognizable for. 8 kilometers from Subotica there is Palić Lake. It is 8 kilometers long and up to 950 meters wide, and its average depth is up to two meters. At the beginning of the 19th century it was familiar that the water in Palić lake was healing, so they had already then started the construction of the first spa. Hotels, villas, sports terrains, three arranged beaches, as well as the zoo, even today keep the rating of Palić. The constructors of the City Hall in Subotica, built a Water tower, Femal stand, Large terrace, Music pavilion, Hotel “Jezero” on Palić… Since 1992, the International Film Festival "Палић" has been organized every summer on Plaić, but there are other known manifestations, too - "Dužijanca", "Interno", "Vintage days"... Wine making tradition of the Subotica-Horgoš sandland, which arose at the bottom of the disappeared prehistoric sea, is more than two millenniums long. Sand terrain, mild continental climate and quality sorts of grape vines together make very potable vines of balanced taste, mild aroma and potable characteristic. The vineyards are mainly situated between Subotica and Horgoš. People living in Subotica propose to eat adequate food with their vines. The meal perkelt, typical food of this area goes along with merlot, when eating paprikaš one should drink cabernet, and when eating veal cotlet with mashrooms one should taste local vine kadarka. Кеlebija has a stable of 70 Lipizzaners and belong to the largest in the country. Here, besides horse riding, one can rent a carriage for a ride, from karuce to carriages up to stage coach from 1700. However, the "hit" in Subotica is riding in wedding carriages.
Audio record: