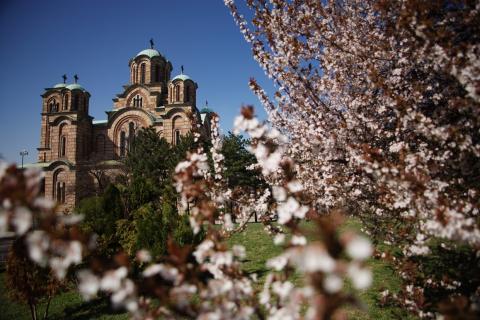 Description:
The continuity of the Christian house of prayer in the place where the Belgrade Tašmajdan Park is located today dates back as early as in the 19th century, when almost in the same place, a little more to the south of the present edifice, and until the Second World War broke out, there had been the original Temple of St. Mark. Due to the German bombing of 1941, the Temple was burnt and so damaged that its remains were completely removed during the year 1942. The new Temple of St. Mark was erected according to the design of the Krstić Brothers architects between 1931 and 1940. The breaking out of the Second World War interrupted bringing the works on the temple to an end. When the construction style is concerned, the temple is a monumental construction performed in the spirit of Serbian mediaeval architecture, on the example of King Milutin’s legacy – the Monastery of Gračanica in Kosovo and Metohija. The external walls are in two colors of natural materials in the Serbian-Byzantine manner of construction. This temple is a good example of how old spiritual models shaped with new construction materials can look nice in the environment of a city, not losing anything of their authenticity and simplicity. The temple’s bell tower is within the structure of the temple itself, on its western side. Mark’s Church is 62 m long and 45 m wide; its main dome, up to the level of the cross, is 60 m high. The pod area of the temple is around 1150 m², and the naos of the temple can accommodate a congregation of more than 2000 believers. The Chorists’ Gallery on the western side can accommodate 150 chorists. On the right-hand side, when stepping into the temple, along the southern wall of the temple, there is the marble tomb of Tsar Stefan Dušan, in which his relics, brought from his legacy – the Monastery of the Holy Archangels in the vicinity of the town of Prizren, the monastery that has been ruined for several centuries now, are laid. On the opposite northern side, the tomb of Patriarch German was built. King Aleksandar Obrenović, Queen Draga and Prince Milan Obrenović were also buried in the crypts.