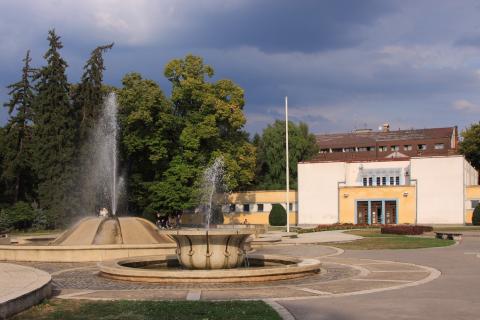 Description:
Niška Banja spa is located in southeastern Serbia, beside the main road between Niš and Sofia. It lies at the foot of Koritnik, which is part of the Suva Planina mountain, at 248 m above sea-level. It is 10 km from Niš and 250 km from Belgrade. The natural therapeutic factors in Niška Banja are the gentle moderate continental climate, the thermal mineral waters and the naturally mineral-rich mud. The medicinal waters, which come from five springs (Glavno Vrelo, Suva Banja, Školska Česma, Banjica and Pasjača), are earth-alkaline homeothermic (36-38°C), lightly mineralised and have a flow rate of 56 litres per second. Niška Banja was well-known during the time of the Ancient Romans, who in the 2nd century capped the Glavno Vrelo spring, building a bath with two pools made of multicoloured marble. During the times of Constantine the Great and his successors, a bath into which the medicinal spa water flowed was located in the royal settlement of Mediana. In 1521, Turkish Emperor Suleiman and his army, who were on their way to conquer Belgrade, stopped in Niška Banja to recuperate. While the Turks were in power, the spa contained separate baths for men and women, as well as several buildings used to accommodate patients. Treatments are performed in the Niška Banja Treatment and Rehabilitation Institute which has three hotels (Radon, Zelengora and Terme), equipped with modern equipment for performing non-invasive diagnosis and for treating and rehabilitating people with rheumatic and cardiovascular diseases, as well carrying out orthopaedic surgery. The institute is also a teaching centre for the University of Niš Faculty of Medicine. In Niška Banja the following are treated: musculoskeletal system diseases (inflammatory, extra-articular, degenerative and metabolic rheumatism, systemic connective tissue diseases and osteoporosis), cardiovascular diseases (coronary heart disease, artery hypertension, heart defects, diseases of the peripheral blood vessels post-surgical myocardial revascularisation conditions, as well as post-open heart surgery conditions, rehabilitation of patients who have undergone hip and knee replacements, post-traumatic conditions, conditions following damaged central and peripheral motor neurones, inflammatory and functional sterility, respiratory diseases. The healthcare and tourist facilities are located in a managed park which covers an area of 5 hectares. In the vicinity of Niška Banja there is the Košutnjak Forest Park which has fitness circuits. Niška Banja is suitable for sports team training and competitions with its small and large football pitches, handball and tennis courts, a horse racing track and firing range. Exciting paragliding competitions are also held in Niška Banja, with competitors taking off from the slopes of Koritnik and landing in Niška Banja. Niška Banja has a library, art gallery and a summer stage on which various events, which come together under the umbrella of the Cultural Summer in Niška Banja, are staged. Guests at Niška Banja can also visit nearby cultural and historical attractions, including the Mediana (residence of Constantine the Great), the Skull Tower (Ćele Kula), the 18th-century Niš Fortress, Čegar hill and the Red Cross Camp Museum Memorial. There are also organised excursions to the Sićevačka Klisura gorge, part of the beautiful Nišava river canyon, which is home to rare flora and fauna, the Jelašnička Klisura gorge, a special nature reserve, the Bojanine Vode picnic spot and Kamenički Vis, a popular picnic spot and ski centre.
Audio record: