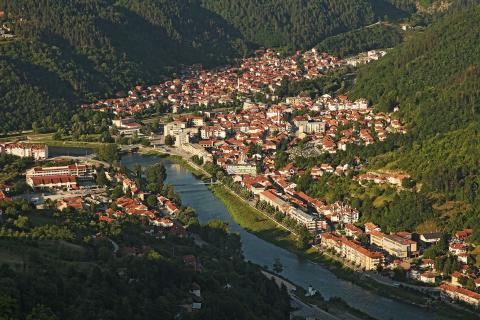 Description:
In the District of Zlatibor Mountain, in the area of the middle Lim river basin, the town of Prijepolje lies. This town is cut by the valley of the Lim river. Old Prijepolje developed where the rivers Lim and Mileševka meet. It has a specific climate thanks to the fact that it is only 140 km away from the sea by air and 160 km away from the Pannonian Lowland. It is a hilly-mountainous region, with the highest-rising point of the peak of Jadovnik mountain (1734 m above sea level) and the lowest at the confluence of the Mileševka and the Lim rivers, at 440 m above sea level. Here, different civilizations left their traces. We are reminded of that by numerous archaeological excavations. Yet, the town on the Lim and the Mileševka rivers was established in the bosom of the Monastery of Mileševa, the famous legacy of King Vladislav, founded in the gentle valley in 1234, five kilometers upstream from the confluence of the Mileševka river. Thanks to the fact that there are exceptionally beautiful frescoes in the monastery, such as the famous fresco of the “While Angel”, and that for a long number of years, the tomb of St. Sava, the first Serbian archbishop and enlightener, was there, the monastery of Mileševa is highly reputed. In 1377, Viceroy Tvrtko of Bosnia was also crowned there. During the 15th century, the monastery was the seat of the Metropoly of Mileševa, and in the 16th century, one of the first printing houses in Serbia was run there, too. Apart from Mileševa, the monasteries of Kumanica, Mili and Davidovica, which was renewed about ten years ago, are also significant. Upon recommendation of the local tourism organization, you must visit some of the numerous village households, which are far known for their hospitality, and also be present at numerous events, such as “The Gifts of the Lim River”, “Petrovac on the Lim River”, “The Lim River Regatta” etc.