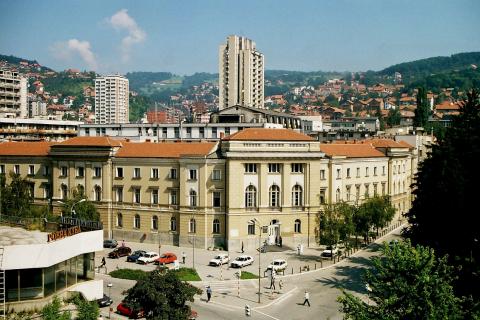 www.turizamuzica.org.rs
Description:
The main road, as well as the railway road to Bar, will lead you to the town of Užice, which is located 187 km away from Belgrade. The town on the Djetinja river is situated in a narrow valley, cramped from all sides by the hills covered with forests and high rocks. The urban part of the town keeps spreading, and as there is nowhere to spread, the settlements are made on the steep slopes, some of the streets being transformed into real serpentines, while some of the suburbs are located in the hills, completely separated from the center. The history of the town dates back in as early as the Roman time, and according to the town chronicle, the first regular elementary school and the first secondary school in Užice began to work in 1839, the post office in 1841, the hospital and the reading-room in 1853. In 1866, Užice was even officially classified into the group of small towns in Serbia. At the beginning of the Second World War, Užice was the seat of the free territory – the so-called Republic of Užice. After having been under partisan control for 67 days, the town was occupied, which was accompanied by a cruel retaliation. Because of that, as early as in 1946, the town of Užice changed its name and became Titovo Užice, which it kept until 1992. The Monument on Kadinjača, 14 km away from Užice, is a highland marked by a monument dedicated to the partisan battalion killed in the war after the free territory of the Republic of Užice had been lost. The Fortress of Užice is certainly the most attractive monument in the town. Its remains are located westwards from the town center, on a high-rising rock, under which the Djetinja river makes a curve in the shape of the letter C. Beneath the Old Town, in the picturesque environment and with a beautiful, small waterfall, there is also a miniature old hydropower station from 1900. It is the second in the world to which Tesla’s principle of polyphase current was applied. Today, old machines work again, but only at the Museum of Technology. On the Djetinja river, in the very town center, beneath the Old Town, there is also a beach of unique beauty, which is the favorite bathing resort of the inhabitants of Užice. Traditionally, a competition in jumping into water from the Old Railway Bridge is organized on the Djetinja every year. The main town square was built according to the building plan after the Second World War. The National Theater and the National Library are in that square, whereas The Orthodox Temple Church of St. George, constructed around the mid-19th century, is in the Square of St. Sava. The White Church, built in 1337, is located not far away from the town, in the village of Karan. The church belongs to the School of Ras. In the church, there are the preserved portraits of the ktetor Brayan with his family, Tsar Dušan and Tsarina Jelena. Near the main road Belgrade-Užice and the railway road to Bar, in the village of Potpeć, there is the most significant cave in Western Serbia – the Potpećka Cave. Its entrance is 50 m high, and 555 m of the cave are illuminated. The cave is rich in rare forms of cave ornamentation. Sevojno is also famous for its log church, whereas the Ethno-Park “Terzića Avlija” is known for its dedication to preserving the tradition and folklore of this region. The famous Tarabić Family lived in the village of Kremna, in between Tara and Zlatibor mountains. They are deserving for the existence of the Prophecy of Kremna, which is very attractive today as well. Early in the 20th century, the village of Kremna was declared an air spa. Mokra Gora (Wet Mount), famous for its Šargan Eight and Timber Town, is located not far away from the village of Kremna. The Šargan Eight is the most attractive tourist-museum railway in Europe. The 300 m height difference from Šargan to Mokra gora mount has been overcome by a railway loop in the form of the number 8, and the “Ćira” train operates on that railway road. Timber Town (Drvengrad) is a film ethno-village on Mokra gora mount. It was built by Emir Kusturica, on the hill of Mećavnik. Mećavnik is located above the village of Mokra gora and, when its height is concerned, it is at the same level as the railway station of Jatare, through which the narrow-gauge railway passes. Timber Town is an unusual ethno-village built in the urban style. At the one end, there is an entrance gate, and at the other end, there is a small wooden church. The church was constructed on the example of Russian churches and is dedicated to St. Sava. In the central part of the village, there is a square, paved with wooden cubes and cut wooden sleepers. It is surrounded by log houses, authentic and transported from that region of Serbia and from Bosnia. In Timber Town, there are also a gallery of paintings, a library, a cinema etc. The Homeland Days are also visited by numerous tourists from the country and abroad. It is worth highlighting that all you can see here is the Šargan-Mokra Gora Mount Nature Park.
Audio record: