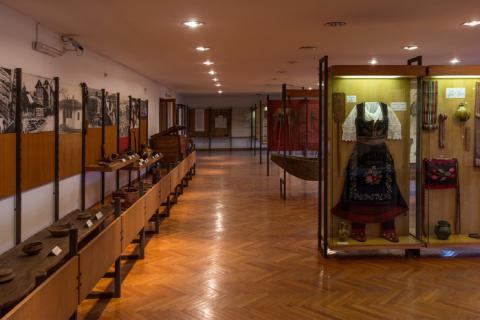 www.mus.org.rs
Description:
Museum in Smederevo was founded on April 12, 1950. Its present name was given by the Decision of the Township Assembly of Smederevo in 1972. Museum in Smederevo conceptually belongs to the category of community museum institutions of complex type, and is composed of historical, archeological, art, ethnological, numismatic and paleontological collections with thematically diverse material. The main activities of the Museum, besides the regular museum activities in the field of collecting, studying, expert and scientific processing, protection and presentation of the objects of cultural-historical, that is, museological significance on the territory of the Smederevo Municipality, also includes cultural-educative, pedagogical and publishing activities. Besides its permanent exhibition, Museum hosts numerous visiting and thematic exhibitions as well as various promotions and lectures. Within the Museum, there is a vocational, non public library. Its holdings total 6,000 volumes. The starting grounds for the formation of the Museum in Smederevo were the Grammar School antiquity collection and confiscated private collection of Milan Jovanovic Stojimirovic. From 1959 to 1972, the Museum was located in the house of respectable resident of Smederevo, above mentioned Mr. Stojimirovic, at the corner of the Streets Ante Protica 2 and Karadjordjeva. In 1972, the Museum was moved to a suitable structure after the adaptation of the ex-hotel “Jadran”, which was built in the old Balkan architectonic style. Since then, the Museum fund has expanded and now the Museum is in the possession of great number of objects. The largest part of it belongs to the numismatic collection (11000 units). The most representative exhibits are exhibited in a thematic-chronological manner of the Museum in the three halls and lapidarium. Therefore, the history of Smederevo can be followed from the paleonthological history and pre-history, through the antique period, Middle Ages, all through the middle of the 20th century. In the first hall there is material belonging to the paleonthological history and prehistoric period and the time of Roman rule on this teritory. Lapidarium is the part of the Museum with Roman, Greek, medieval Serbian and Turkish tombstones, monoxile rowboat –ladva. As well as other objects showing the development of material culture in this area through the centuries. The second hall is fully dedicated to the Middle Age period of Smederevo and its surrounding, especially to the period of Despot reign, because of the great importance Smederevo had as the Serbian capital of the time and the witness to the glory and fall of Serbian medieval state. In the third hall there are exhibits dated from the time of Turkish rule, the period of the First Serbian Uprising, the time of the Obrenovic dynasty, the Second World War as well as the exhibits from the modest ethnological collection. Museum in Smederevo Omladinska 4 11300 Smederevo Republic of Serbia Tel/Fax: +381(0)26.46.22.138 / +381(0)26.46.23.439 Web site: www.mus.org.rs E-mail: info@mus.org.rs Facebook: www.facebook.com/muzejsd Permanent exhibition working hours: Tuesdays to Fridays: 10am to 5pm Saturdays to Sundays: 10am to 3pm Closed: All Mondays (feast days included) Entrance fee: General price – 100 RSD Reduced price - 70 RSD - Group visitors (more than 15 visitors per group) Free of charge: - Children younger than 7 years old - Members of ICOM and museums`staff members - National and local tourist guides