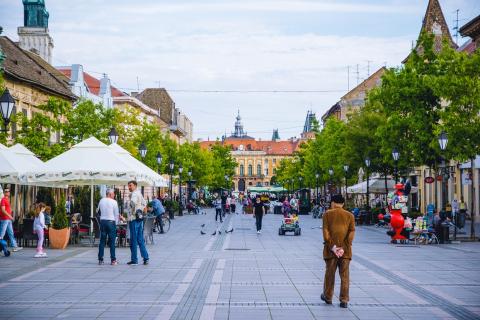 www.visitsombor.org
Description:
The noble town of the Bačka plain, Sombor, is situated 174 km away from Belgrade, and 99 km from Novi Sad down the regional road. It is situated close to the Danube and the international route Belgrade-Novi Sad-Budapest. You will really enjoy if you decide to visit its city lake. On the central square, there are many Baroque buildings and Classicistic City Hall with a high tower (1842). The largest painting in Serbia (28 square meters) - "The Battle at Senta" made by F. Eisenhut, is kept in the beautiful building of the County Hall (19th century). This pompous building has as many rooms as many days in a year. In the Hapsburg times, the central square was dedicated to the Holy Trinity. The Orthodox Church of the Holy Martyr George and the Catholic County palace dating from 18th century are situated in the center of the town. Pasha’s tower is in the vicinity of the square, and today it is reconstructed and holds the studio of the painters in Somor. It is impossible to imagine Sombor without the tambourine players. From long ago, the sounds of tambourines have been heard and the stories of ancient tambourine players have been told. A carriage is also, a special symbol of this town, so even today, it is not a problem to take a ride in a carriage down the center of the town. There are 16 national farmsteads around Sombor that today look as if the time had stopped. Contact the local touristic organization and see to visit them. The surrounding of the town is a real paradise for fisherman. There are Great Bačka and Bajski Canal, but the largest European river Danube as well. The river Danube makes the real effluents but the boglands as well that present the most important fish hatchery.
Audio record: