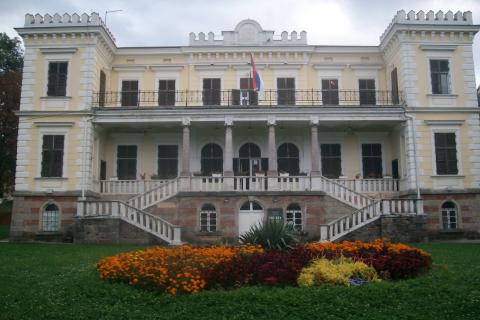 Description:
Work unit Castle of culture functions as a museum in the Cultural Centre of Vrnjacka Banja. Performs the activity of protection of cultural property in the administrative territory of the Spa, as well as the exhibition, a concert, educational and publishing activities. It is located in Castle Belimarković otherwise referred to as the Castle of Culture. Belimarkovic Castle is one of the oldest and most representative buildings in Vrnjacka Banja. It belonged to Jovan Belimarkovic (1827-1906), a regent to underaged King Aleksandar Obrenovic. It was built on a hill slope above a worm mineral spring and it dominates its surroundings. It was built taking Italian field castles of the time as the model, designed by his nephew, a civil builder called Pavle Denic, and supervised by Austrian architect called Franz Winter, between 1888 and 1894. Most of the construction work was completed in 1889 because King Aleksandar Obrenovic was a guest here in that year. Belimarkovic's descendents used to live here until 1968, when the castle was bought by the state and turned into a museum, gallery and concert hall. The building has been protected by the Law of Monuments of Culture Protection as a cultural wealth of great value to the Republic of Serbia. It preserves the Artistic collection of Тhe Castle of culture, as well as archaeological, ethnological, historical and art collection of the Land Museum Vrnjacka Banja (Vrnjci Spa). Throughout the year one can see permanent exhibitions which are thematically: memorijamna historical exhibition "Memorial Room of General Belimarković" archaeological exhibition "Lađarište - praistorija Vrnjaca" and historicals "Vasa Popovic - war photographer and engineer Vrnjci" and "On the watering." Occasional settings are changed for a month and work in cooperation with related reference institutions in Serbia, then from its own collections as well as in collaboration with contemporary artists. Concerts of classical music are held from April to October, and from 20 to 30 July the traditional international festival of classical music "Vrnjci". At the beginning of June (1-10), the "Days of Ethnographic Film" at the beginning of July (4-8), the "Days of Archaeological Film". Every Thursday in August, the lecture series "The great Serbian scientists." Working time It is open for visits every day from 07 to 21, Saturdays and holidays from 07 to 15. Closed Sundays. Admission is free. 7th Street July 7, 36210 Vrnjačka Banja zamuzej@ptt.rs