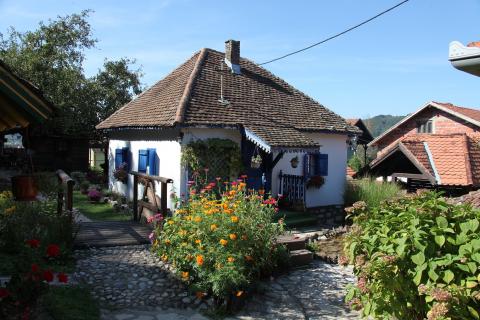 www.zavicaj.info
Description:
The ethno-park “Terzića avlija” (Terzić Family’s Garden) is a rural tourist household located in the vicinity of Užice, dating back in the early 19th century. It was delivered the highest acknowledgment in the field of rural tourism (The Tourism Flower, 2008), which is awarded by the Serbian TO for the contribution made to the development of Serbian tourism on the World Day of Tourism. The household is ECEAT certified. The ethno-park consists of: - the museum part (the setting of the old prewar classroom, a rich collection of exhibits ranging from the Roman period, via the Middle Ages and the Rule of the Turks, the Principality and the Kingdom of Serbia, the Kingdom of Yugoslavia, the two world wars all the way to the time of the SFRY) - the catering part with the national cuisine - the suites for the accommodation of guests within village tourism - the workshops of traditional folk costumes and traditional jewelries - the demonstration center for the presentation of the old pottery-making craft and the making of the traditional folk costume - the souvenir shop - the summer stage - the camp for mountaineers. There are four circular paths going from the ethno-park “Terzić Family’s Garden” (in the total length of 60 km), which connect the ethno-park with the nature monument of Potpećka Cave (The Cave under the Cave), the small river of Petnica and the fishponds with trout, the belvederes, the highest peak in the village, on which there is a monument in the shape of a stone pyramid (Gradina, at 931 m above sea level), Roška Banja Spa, the Rzav river, the Rupeljevo mine pit, where the potters of Zlakusa excavate the calcite mineral. The offer: - The program of pupils’ excursions, organized tourist visits, seminars, celebrations; - Transient lunches for organized tourist visits; - A stay on the basis of all meals included , half-board and bed-and-breakfast only; - The making and sale of Serbian traditional folk costumes and traditional jewelries; - The presentations of the old pottery-making craft and the sale of pottery products; - The presentation of the making of traditional folk costumes, weaving and jewelry making; - Night stays at the camp; - Mini-concerts of the folklore ensemble and the members of the children’s folk orchestra and the band of flute players; - A walk down the marked pedestrian paths; - Teaching tourists how to do handwork (making traditional folk costumes and jewelry, weaving, knitting, embroidering, crocheting…); - Teaching tourists how to prepare winter supplies, domestic juices and domestic food; - Events; - The International Eco-Camp. Zlakusa bb, Zlakusa Tel: +381 31 546 118 ; +381 69 546 1180 ; +381 63 843 9866
Audio record: