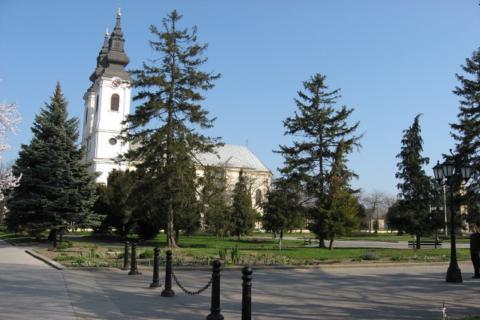 www.cst.org.rs
Description:
The fact that through Srbobran there are two main roads traspassing and connecting Central and South Europe is actualy what made that place become one of the most developed in Vojvodina. The look of the downtown is the evidence that Srbobran has had a long history. The Church of Epiphany dates from 1787 and the one that dominates is the Roman-Catholic Church of Exaltation of the Cross built in 1815. Srbobran has had its present name since 1918 named after the ditch built in 1848 to defend the settlement being located on today’s Srbobranska Street. In the named ditch there were Serbian people hiding, so the ditch was first called Serbian, and then Srbobran. People say that the land in Srbobran is very fertile, which the result of the ground is being rich in waters in this municipality. There are the rivers Кrivaja, Great Bačka Canal, but the ponds as well out of which the most famous is Beljanska. Srbobran is rich in underground waters, and even thermal ones with very favorable temperature. Unfortunately, one must notice that the water is not used for therapeutical purposes, but the villagers use it to water their plains. Nature and accommodation in this region is completely adjusted to the modern guest's needs, and yet its archaic beauty will surely bring you back into its area again. Тurija and Nadalj are rural areas. Тurija, known for the sausages and Sausage Fest, got its name after the river Turija, the right confluent of the river Drina, where the first inhabitants of this place came from. Nadalj has more versions regarding the origin of its name. People say that, it is most likely that Nadalj got its name after the wilderness inhabited by the peasants.