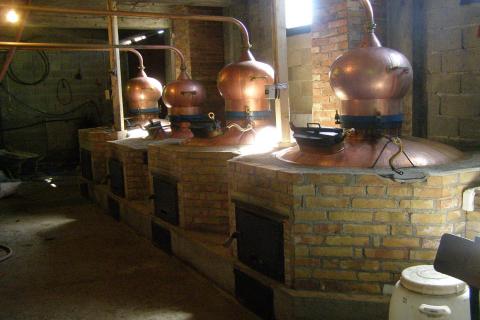 www.starapesma.com
Description:
The fruit growing region of Bajina Bašta is located on the hills and slopes of Povlen and Tara mountains and is quite a suitable region for the production of quality fruit, when its natural features are concerned. Its modest continental climate with big differences in temperatures during the day and in the night has a beneficial influence on the fruit aroma. Several centuries ago, the Ilićs came to live in one of the most beautiful villages – the village of Pepelj, located on the slopes of Tara mountain – a real beauty among mountains. Very soon, they became aware of the suitable natural conditions for fruit growing. The specific climate of the southern slope that are unselfishly exposed to the soothing Sunrays all day long had produced the fruit that contained great quantities of sugar, and the forests in its vicinity gave it a special aroma. The ice-cold water of the Zmajevo stream gave special freshness to the fruits, which for that reason were bigger and sweeter than others. Traditional producers used such fruits to produce the drink that is only served on rare occasions and to selected guests. The perfect bouquets came from the casks made from a-hundred-year-old oak trees. The generations of their ancestors continued the tradition of raising fruit plantations, cask making and brandy distilling. On the same slopes, their ancestors plat fruit and distill brandy even today. Brandy as brandy – almost the same, but yet different, so the Ilić Family’s brandy has always been considered as easier to drink, more rhapsodic and more aromatic than other brandies. The generations have been working hard and enjoyed life over drinks and songs, so “The Old Song” brandy was made to the rejoicing and pride of the present generations and those to come. 36 Pilica street, Pilica (Zlatiborski okrug - Bajina Bašta) Tel: +381 64 803 2852 ; +381 31 858 234
Audio record: