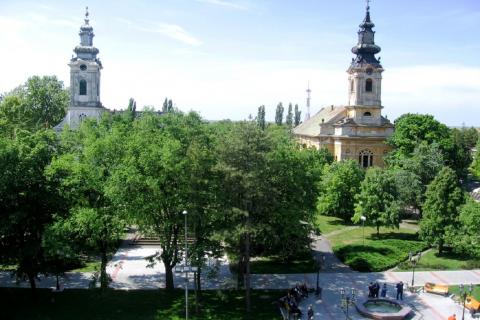 www.turizamvrbas.com
Description:
Kula adjoins Vrbas, a city in the heart of Bačka, on the crossroads of major roads. Тhere is the railway Belgrade-Novi Sad-Subotica-Budapest, as well as the regional road Novi Sad-Srbobran-Vrbas-Sombor. It is 44 kilometres away from Novi Sad, and 125 кm from Belgrade. The town is bounded with the river Danube and Tisa, and it has its river – Crna Bara. After the Second World War it got its name Titov Vrbas, when in 1990s the former name was brought back. Vrbas, like many towns in Vojvodina, used to be located on the marshes where the most common construction materials were ground and cane. Regarding architecture of this city, the influence of the Middle Europe is evident, much more than Byzantine. There are six churches standing out, as follows: Serbian Orthodox Church, Catholic Church, Reformation Church, Russian Church, Evangelical Church and Methodist Church. Besides them, in Vrbas, there are other monuments like – splendid villas owned by rich industrialists, Chapel "Vodice", monument to Jozef Kiš… In old Vrbas, there is Bapina baza which holds the exhibits, photographs and historical material from the Second World War related to this municipality. Back then, there were illigal bases formed where secret headquarters operated, but the Partizan headquarters. One base was located in the house of Dragutin Radanov Bapa, who, together with his five children, succeeded to keep that place secret during the whole period of the War. This place is interesting for the fact that, actiually, another house in the yard, built in 19th century, is a kind of interior and exterior typical of a Serbian country house in Vrbas. Hunting tourism in this municipality has had a long tradition. The most important and most equipped hunting grounds are in the area of Savino selo and hunting grounds Kucura, specialized for the rabbit hunting. Vrbas is known for an excellent food production, so it's worth trying some specialties in any of the national restaurants there.