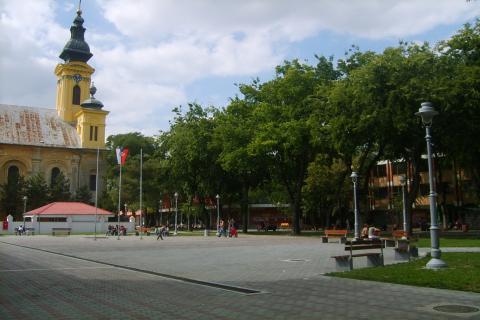 www.turizamodzaci.rs
Description:
Udžak was the name of the first settlement that was founded by the Turks in 16th century on the place of present Odžaci. It is situated on the route Novi Sad-Bačka Palanka-Sombor, and it is 139 kilometres away from Belgrade. It is surrounded by the municipalities Apatin, Sombor, Kula, Vrbas, Bačka Palanka and Bač. The central (and only) city core in the municipality is the town. There arises the Roman-Catholic Church of St Archangel Michael (1821). A museum unit in Odžaci holds valuable items among which there is a worldwide known Neolitic find of Donja Branjevina. On this find an unusual object was excavated – a female statue, symbolically called Redheaded Godess, dating from Early Neolitic period, more than 7000 years ago. This figure is exceptional for its monumental look compared to other objects. namely, it is 38 cm high, while similar figures are not higher than 15 cm. Odžaci is surrounded by numerous smaller lakes made in overflowing of the river Danube in 1926. People say that hunters, for hunting small deer, especially like the surrounding of Odžaci, and numerous canals are very popular with fishing as well.