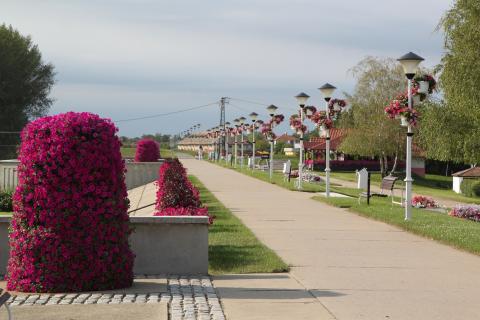 www.novibecej.rs
Description:
On the other side of the river Tisa, a town called Novi Bečej is situated. This place is 113 kilometres away from Belgrade. The chronicles of the town read about horrible fires in 1886 which destroyed more than a third of the settlement. However, there are the remains of the Middle Age Basilica from the 14th century (Arace, 14 kilometres away from the centre of the municipality). The largest building of the hydro engineering system Danube – Tisa – Danube, large concrete dam with seven weir overflows and waterlocks, is situated immediately next to Novi Bečej. On the Danube-Tisa-Danube Canal there is an attractive Ajfel’s waterlock, one of the top technical achievements from the beginning of 20th century. Šlajz, usually called by the villagers, arose from the pure need. Water was, from time to time, flooding the city, until a century ago it had been decided to build a powerful dam at the confluence of Great Bačka Canal and Tisa. It has not been confirmed that the waterlock is the work of famous Eiffel, but the fact is that the grid construction of Šlajz irresitably resembles the Eiffel Tower in Paris for its style. Rich hunting grounds, the picnic place Sokolac that can be reached by the use of excellent roads, attract guests. Novi Bečej is known for the Assumption days in Vranjevo. People from Novi bečej are also known for the competition in preparing fish soup and International camp traditionally organized there during the summer period.