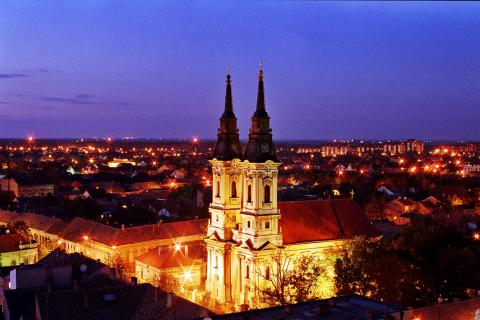 www.pancevo.info
Description:
In the mouth of the two rivers Tamiš and Danube, only 13 kilometres away from Belgrade, there lies the city of Pančevo. Namely, it is separated from the capital only by the Pančevo Bridge. Desite being so close to Belgrade, Pančevo is a typical city of South Banat. Although it belongs to industrial centres, immediately when entering it one has an impression of being in a calm place which offers the possibility to relax. The numerous churches and attractive buildings dating from the 19th century make the downtown look so beautiful. The Roman-catholic church of St Carlo Borromeo situated in the very center of the city was actually a rearranged House of Count Marus in 1722. There is also the Church of the Transfiguration, with power-looking tall bell-towers, and rich treasury painted inside by Stevan Aleksić, while the disturbingly beautiful icons were painted by well-known Uroš Predić. Today, this temple presents one of the symbols of Pančevo. The Church of the Dormition, a Basillica dating from the beginning of the 19th century, also presents a trademark of this city. Karađorđe was the one who donated logs for its construction and foundation for making briks for the temple. Only five kilometers in the north-east away from Pančevo, towards Starčevo, and four kilometres away from the confluence of the river Tamiš into the Danube, there is situated the Monastery of Vojlovica. Tradition speaks that it was built already in 1393, after the Battle on Kosovo. Its prehistoric background of this area is also very important. Archeological localities confirm the continuance of settling dating from the incomprehensive old times. For its spectacular characteristics, the finding of a bewildering prehistoric culture is predominant, known as Starčevo culture. It was named after the place Starčevo where the largest find was exchavated. Industrialization in sixties and seventies of the last century, made Pančevo become an economic center. „HIP Azotar“, oil rafinery, plastic mass industry, airplane industry, glass and bulbs industry are located there. The tradition of brewing in 1722 was continued. It may be very interesting to go for a walk along the river Tamiš where there are a lot of places for relaxation – unusual restaurants (especially fish restaurants) and cafes. Deliblato Sand is situated 13 kilometres away from Kovin and spreads to the the banks of the river Danube, and is a unique one in Europe. The way this unique natural resort came to existance, its specific dune relief, very rare in Europe, preserved ecosystems and rare species of flora, contributed to Deliblato Sand being under the law protection and nominated for the Bioshpere reserve.
Audio record: