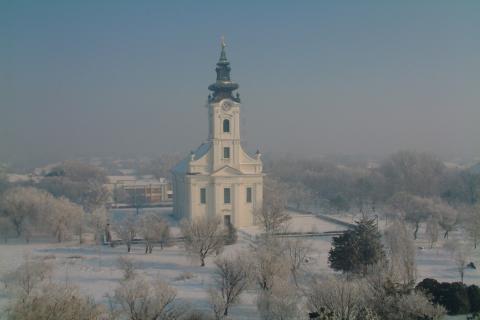 www.took.org.rs
Description:
A small but specific and well-known one town of Kovačica, can be reached through the fields of sunflowers towards Zrenjanin. It is exactly 50 kilometres away from Belgrade. Kovačica is well-known for two things. Firstly – this place has been inhabited by mainly Slovak population, and secondly – they are the only one engaged in very unusual, famous worldwide Naїve painting. The very center of it is marked by the Central park with a church. However, the fact that is noteced at once is that all the houses are marked with plates containing the number and owner of the house as well as the year of its construction. Tradition of Naїve art in Kovačica dates back in 1939 when two villagers – Martin Paluška and Jan Sokol started painting. The movement was spreading and the tradition was continued in the fifities when Paluška, Sokol and several art-oriented villagers founded a painting club. They gathered interested villagers of Kovačica, Padina and other places and created a specific style in painting anything that surrounded them. None of the painters in Kovačica, now and then, did not finish any (official) school for that kind of arts. The first exhibition of Naїve art in Kovačica was held in 1952. Three years later, the Gallery of Naїve Arts was founded.