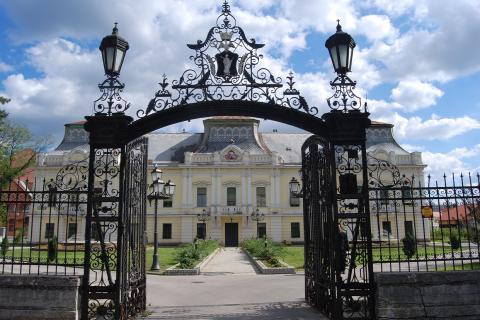 www.to.vrsac.com
Description:
On the highway Е 70, 84 kilometers away from Belgrade, there is a town called Vršac. This town is known for a large number of windy days, and its ripple marks in the environment – slopes of the Carpathians Mountains are famous for being vineyard area. A ten minutes drive takes you to the border crossing to Romania – Vatin. An international railway Vienna – Budapest – Belgrade – Bucharest. You can also fly to fet there! Vršac has a small airport which runaway is one kilometer long, and 25 meters wide. In the town of Vršac, the oldest buildings date from 18 century. What dominate there are: The Bishop’s Palace, built in the Baroque period, the Church Cathedrale (orthodox), the Church of St Gerhard built in neo-Gothic style (Catholic), the City Hall, the House of Jovan Sterija Popović and the City Museum keeping rich archeological collection of localities from Vatin, Dubovac and Židovar. At the corner of streets Kumanovska and Stevan Nemanja there is an Old Pharmacy, which people call „a pharmacy under the stairs“ for its unusual stairway. The house it is located in dates from the middle of the 18th century and there was the oldest Vršac pharmacy called “At Savior’s”. This purpose of the building was kept until 1965 when it was joind to the present City Museum. The Vršac Tower can be clearly seen from all parts of the town, the building dating from the 15th century which everyone should visit. This town also has splendid opportunities to go in for some sport. Various recreations are provided in the magnificent Sports Center "Мillenium". The people in Vršac are proud of their tradition. They say that they have great wine cellars, and every third weekend in September they are proud to invite people to Vršac vintage. During the summer this town is the host of the International Folklore Festival. Today, Vršac is a town with a developed network of schools, sports institutions, health centers, and primarily, exceptionally sound economy – „Hemofam“ Company, „Vršački vinogradi“, Vršac breweries, company of confectionery products "Banat"... For a long time, there is a Flying Academy of JAT in Vršac providing education for the candidates coming from the entire Balkans.