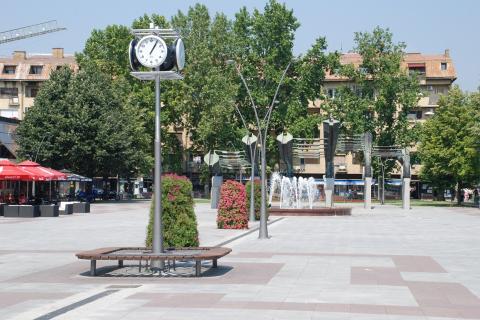 www.rumatourism.com
Description:
Ruma is situated in Srem, 65 kilometers in the west of Belgrade and 35 kilometers of Novi Sad. It has excellent communications connections, and the international highway Belgrade – Zagreb is only 6 kilometers away from it, and the main north-south road route connecting Vojvodina and Novi Sad with Sarajevo and further on with Adriatic coast also passes through thetown. It also presents an important railway station on the railway Belgrade – Zagreb. This city is situated in Central Srem, on the southern slopes of Fruška gora. During its fairly rich history, it has been noted that Ruma had a period of rapid development in the thirties of 20th century. Numerous shops, crafts and manufactures were started, banks were founded, cinemas opened, and in several printing offices in the place a lot of books and newspapers were printed following political, economic, and cultural and sports life of the town. Although Ruma had, since long ago, belonged to the city rank according to its economic strength (the largest crops market in the Kingdom of Yugoslavia) and cultural level of its inhabitants, it officially gained that status only in 1933. If you come to Ruma, you should visit the City Museum (Gradski muzej), with exhibits that speak of the way of living and history of inhabitants of Srem. Cultural life in the town has been under the influence of several cultural institutions. The oldest church in Ruma is the Orthodox St Nicholas Church, built in 1758, and dating only few years later there is the Church of the Holy Ascension from 1761. The archaeological site Gomolava Hrtkovci, from Upper Palaeolithic or Early Neolithic period, also lies in the area of the municipality of Ruma. Not far from the town, there is a popular picnic area Borkovačko jezero (Borkovac Lake) with all supporting facilities for a pleasant stay. Besides that Ruma has very well equipped hunting grounds: Karakuša and Morović. Traditionally, the citizens of Ruma organize every summer the Watermelon Fair, Tamboura orchestras fest, Visual arts colony, Amateur Theater Festival… If you would like to taste Srem cuisine, you should visit some national restaurant there.