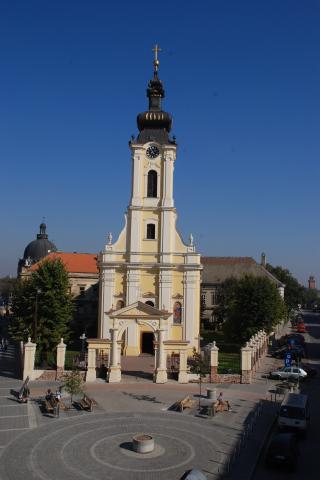 tosmomi.rs
Description:
The municipality Sremska Mitrovica is situated in the north-western Serbia, and it is in contact with various morphologic wholes: Srem and Mačva's plains and hill foot of Fruška Gora. The way to it is 74 kilometres along the highway Е 70. Sirmium, the city out of which grew todays Sremska Mitrovica was very important Roman city and an early Orthodox site. Erected on the crossroads of several key communications on the banks of a large and navigable river Sava, it very soon provided conditions to evolve in a large center vith numerous institutions. The emperor and philosopher, Marcus Aurelius, in the emperor’s palace which had the under floor heating system, and which floors and walls were covered with mosaics and frescs. The remains of this palace speak about large thermal baths, barns, block of flats, bastions. Some of the remains of this large city at that perod can be still seen in the center of Sremska Mitrovica, although its larger part remained hidden under the modern city. The most interesting excavations might be seen on the corner of the streets Pivarska and Branka Radičevića. Along the center of the city square, Nikola Pašić Square, there is one more archeological find left excavated. This Square, once known as Žitni, is surrounded by many beautiful edifices of ancient traders of Mitrovica, mainly from 19th century. Several houses have semicircular gables, like German ones, which speak about the influence made by the Habsburg Empire. Not far from the square, there is the Church of St Stefan, the oldest one in that area, dating from the 16th century. Since it was built during the ruling period of Turks, it had to had a very modest outside. A small wood tower was added long afterwards. In Sremska Mitrovica, the Museum Srem is located in two separate facilities. One part is in Pinki street, opposite the Hotel "Sirmium". It has the icons and paintings exhibited dating from three centuries ago. The second part implies the so-called Roman collection and is located in St Stefan Street. Immediately next to the Museum, there is a former customs post, known with the villagers as the Emperor’s House, dating from 1729 and is considered to be the oldest edifice in the place. In the vicinity of Sremska Mitrovica, upstream the river Sava, there is a natural resort Zasavica. There is also a small river called the same which calm flow often resembles the water in the lake, than the river flow. This river is surrounded with originally preserved marshes, flooded meadows and forests wit numerous kinds of plants, fish and insects living there.
Audio record: