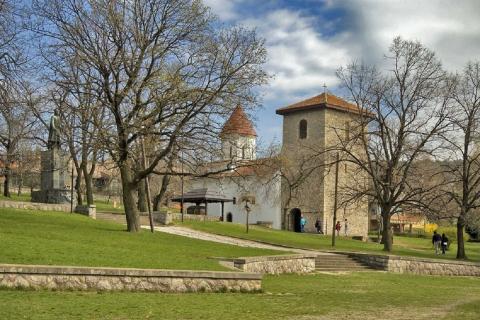 www.topolaoplenac.org.rs
Description:
The town of Topola is 80 kilometers far from Belgrade. It is surrounded with Smederevska Palanka, Rača, Kragujevac, Gornji Milanovac, Aranđelovac and Mladenovac. Under the present name it was famed by Karadjordje Petrović who had chosen Topola to be the capital of the part of Serbia liberated from Turks. It can be seen even today at every step of this small place that it was political and administrative headquarters of Serbia in the First Serbian Uprising in 1804. Truly, in 1877, in the period of the ruling of the Obrenović dynasty, the fortified town built by Karadjordje sixty years before, who was born in that area, was destroyed. Today in Topola, you can recognize among the remains of the Karadjordje’s town, a Resuidence with a tower which is turned into a Museum of the Vožd’s personal belongings and weapons from his times. There is also the Church of the Holy Virgin Mary, known as Каrađorđe’s Church. This edifice is extremely symmetrical and rustic. The interior is rich in paintings, and the iconostasis is a woodcraft. Even today, people can be present in the area where the monument to Karadjordje dominates, during the divine service. The forest park Oplenac, which can be reached on foot form the center of Topola, presents a place for those who like grenness to enjoy. With its high pine trees, old oak trees, ash trees, lime tree and Pančić spruce, is protected by the government. Мausoleum of Karađorđević dinasty, the Church of St George on the tophill of Oplenac, above Topola, dominates this part of Šumadija. A large five-tower church with a central base, is plastered with aureole of white marble, and the interior is covered with mosaics (40 milion squares in 15.000 shades). There are also the copies of the most beautiful fescues from 60 Serbian monasteries, 725 compositions with 1500 figures. Its building lasted for years, and that is why this edifice presents a kind of antology of the Serbian Middle Age frescue arts. In the central part of the church there are the tombs of Karađorđe and King Peter First (1903–1921), to whose wish and idea the church had been constructed. 22 members of the Royal family are barried in the crypt. Two more rulers also were barried there – Prince Aleexander and King Alexander First. The very complex of Oplenac is entered through a specific watchtower, a typical edifice of Šumadija style. The summer house of family Karađorđević (Peter’s House) on Оplenac, today, presents a museum – Gallery with the exhibitions related to the life of this dynasty. Next to this museum, there is a King Alexander’s Villa, as well as Queen Marija’s Villa. This area is a synonym for good grapes and vine. Ancient documents from state archive also state that during the ruling period of Prince Miloš, the vineyards of this area used to be so fertile that people could not store it all. Grapes and vine are even today the symbol of every village in this area. That is why this area is called “Metropolis of Serbian grapevine”. The King’s basement in Topola has two floors underground, with a permanent temperature of eight degrees Centigrade. 99 casks are kept there, each of them storing 4000 litres. The village Vinča, as well as the hill in continuation of Oplenac, was called by ancient Romans after vine - Vincea. Every October in Topola, there is traditional Oplenačka vintage, a three-day manifestation dedicated to vintage and vine. Тopola’s hills are rich in other fruit as well, therapeutic plants and various digestive fungi. In Lipovac, by the country school, there is one of the oldest oak trees preserved in Šumadija. Its perimeter is 5.5 meters, and its existance inspired painters to organize, at exactly that place, beside the old oak tree, a traditional Lipovac visual art colony. On the other hand, the village Ovsište, where Serbian writer Radoje Domanović was born, gathers together the most important Serbian satirists.
Audio record: