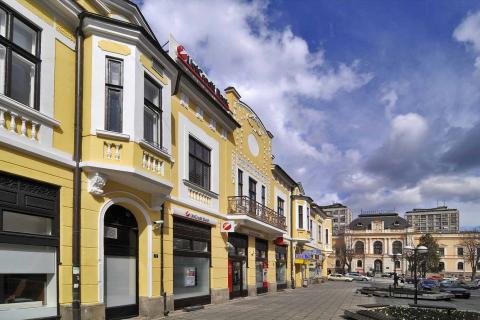 www.gtokg.org.rs
Description:
The largest city in Šumadija, Кragujevac, is situated in the south-west from Belgrade, 120 kilometres away when driving through Topola or 140 kilometres when driving on the highway and taking a turn at batočina. The railway connects it to Budapest, Thessaloniki and Bar. Кragujevac was the first capital city of the new centuries Serbian country born in the Serbian revolution (1818–1839), where the first cultural and educational institutions were established. So, Kragujevac is also the first to have a court (1820), High school (1833), first newspapers (Novine srbske), first theatre Јоакim Vujić, first Royal orchestra under the conduct of Јоsif Šlezinger, first secondary school, first molded canon (1853) and first power plant (1884)... The core from the times of ancient capital lies in the river Lepenica. On its right bank, there is a Church of Holy Trinity with the old Assembly. There, the most significant decisions for Serbian people and country had been brought. In 1835, at a well-known Sretenjska Assembly, the first Constitution of the renewed Serbia was approved. On the left side of the river Lepenica there is Amidža’s Quarters, the only edifice preserved from the duke palace complex. The same complex of facilities including the Museum, include the Residence of Prince Mihailo. As in many other cities, in Kragujevac as well has in its central part the pedestrian zone starting from the Square at Cross. The main street leads to the Memorial park in Šumarice, where during the Second World War around 7000 citizens of Кragujevac of all ages were executed. In the middle of 19th century, Kragujevac became an industrial center, and its prompt development after the Second World War was initiated by the decision made by the government to move the weapons factory there, and then start the car and truck production. Кragujevac has also (again) first public aquarium in Serbia. There are a lot of fish, amphibians, reptiles and invertebrate from around the world. In the surrounding, there are middle age monasteries Voljavča, of Annunciation, Nikolje, Petkovica, Denkovac, Raltinac, Sarinac and Divostin. All of them were built in Moravska style, with interesting architectural solutions, with the remains of layers of ancient fresques. Upstream from the monastery Petkovice there are the remains of the fortification Srebrnica. It was, together with the Church of St Nikola, claimed by Princess Milica to be the gift of duke Nikola to the monasteries of Holy Mountain, St Pantelejmon. ветогорском On the other hand, it is believed that at the Divostin Monastery dedicated to the Lady Day, a saint was barried and that the water running from the spring, called Svetinja, is healing.
Audio record: