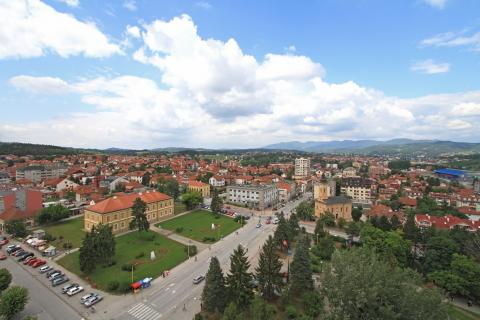 www.togm.org.rs
Description:
When driving along the Ibar highway towards the sea, 124 kilometers from Belgrade, there is Gornji Milanovac. This settlement was founded by Duke Alexander Karađorđević, after he had moved from Brusnica (an old downtown). For six years the place was called Despotovica, after the river running through, when the Prince Miloš changed its name in the memory of his brother Milan wh died in Romania. When you reach Gornji Milanovac, first you should see is the building of the former District office, almost as old as the settlement itself. Today it includes the Cultural Center, Library, Modern Gallery and municipal television station. In front of it, there are the statues of the founders of the town, the Count Alexander, Duke Milan Obrenović as well as the bust of Duke Živojin Mišić who commanded from it in Suvoborska-Kolubara battle. In Gornji Milanovac, there is also the Church of Holy Trinity, the endowment of Prince Miloš from 1860. In a part of the town there is also so-called Hill of Peace with the monuments dating from the recent history, as well as the Norwegian house, a combination of a Viking ship and old Serbian house in its design, presenting an expression of friendship between the Serbian people and Norwegians. It holds a permanent exhibition of items from the time of the suffering of Serbs in concentration camps in Norway. As soon as you leave the municipality area you come to Rudnik, the mountain which dominates the Central Serbia. This mountain and the town on it used to be the center of living long before the coming of Slavs. Even ancient Romans used to dig out minerals and mint. Today, in this so-called air spa, there are a lot of nature lovers, and mainly, mounteneers and hunters. Ostrvica is a volcanic hill dominating the area and its fortress as well, which walls are the only that left. On the slopes f Rudnik there is the Vraćevšnica monastery, including three mansions from different periods and the Church of St George. Three kilometers above Vraćevšnica, there is a Residence of Prince Miloš in Gornja Crnuća, which was the capital of Serbia for three years, until its moving to Kragujevac in 1819. Takovo also belongs to the municipality of Milanovac, where from Miloš Obrenović started the Second Serbian Uprising in 1815. When there noone should miss visiting the hut-church from 18th centiry with carved front door and iconostasis. Savinac, the hamlet of the village Šarani in the Takovo area, keeps the legend that St Sava had passed that way and that even today the print of his horse’s hoof can be seen. Under the roof of the Savina Church, Mina Karadžić was barried, a poet and painter and daughter of Vuk Karadžić. 12. KNIĆ In the heart of Gruža, 20 kilometers from Kragujevac, there lies Knić. From Belgrade, it can be reached after 150 kilometers in the south. Its position on the railway corridor Kragujevac – Kraljevo and lying on two highways provides good communications network with this town. Archeological finds provide evidence that the settlements had been formed there in the Early Stone Age, and in the later age of Jelinska and Roman culture. The Church of St Elijah in Knić was built in 1910 on the foundations of the ancient temple from 1842. The wondrous rose of Gruža, as a poet Dobrica Erić, being its loudest villager, calls it in his poems, today is famous for its agriculture and fruit-growing. The rivers in this area are not polluted, and passionate fishermen can catch gudgeon, chub and rainbow crab. The lake in Gruža, which main purpose is water supply of Kragujevac, and it has a lot of quality kinds of fish – catfish, carp, pikeperch. Besids, this lake has been a place for rowing clubs preparations for a long time. Borački karst is a kind of natural phenomena and being such it is protected by the government. The remains of the middle age town on the very karst and traces of it in the footing, as well as the historical writings, all indicate that it was a rich ancient settlement. The town of Borač resembles the remains of the church from the 8th century, in which port the lime-tree is growing, which is so wide that four grownups could not embrace. Similar tree can be seen in a wonderful Kamenac Monestary, from 15th century, in the village of Čestin. In Borač karst, every winter, people organize a traditional fox chase. The beauty of this area attracts painters as well, for whom a visual art colony “Gruža autumn” is organized.