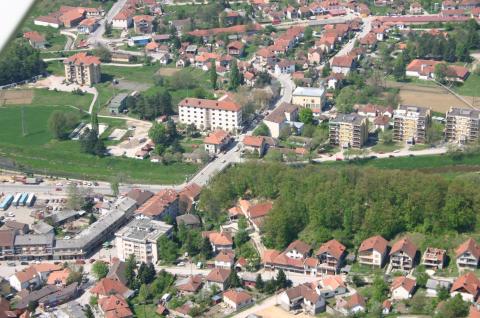 turisticka.org/ljig
Description:
Ljig is located at the foot of the mountain Rajac, along the Ibarska highway, and it is 85 kilometres far from Belgrade. People call it Kačer, too, after the so-called river running through it. It adjoins Aranđelovac, Gornji Milanovac, Mionica, Lazarevac and Lajkovac. This picturesque tows, with around 3000 inhabitants, is relatively new settlement which villagers are mostly engaged in crop husbandry and fruit-growing. Domestic brandy and gibanica are well-known products of this area across the borders. Lately, Ljig has been a destination of many tourists. Mostly because of Banja Ljig spa which is around 2 kilometers away from the town, and is located on the major road Belgrade-Podgorica. This spa-center has a lot of thermal-mineral waters of 32.50C. Mineral water is used for drinking and having a bath. It is considered to be very efficient in healing all the rheumatic deseases, and conditions after bone fracture. The surrounding villages are a real cultural treasury. The church in the village Ba is worth visiting, dating from 15th century. Тhere are also some cattle-breeding summer settlements Kolibe, under Rajac and Ravna Gora. On the highway, in a village named Dići, there are the remains of a church for which reliable sources of information say that its founder was the king Dragutin Nemanjić. The road from Ljig to Rajac leads through Slavkovica, a small place, known since long ago for the granite said to be unique in the world, and for the churches from Middle Ages in the hamlet of Ikonić, in which crypt the sarcophagus of Despot Đurađ Branković, Đurađ Smederevac and Lady Despot Jerina. The mountain Rajac is becoming more and more attractive for tourists. The merits for this fact belong mostly to the manifestation held every year, in the seconf week of July. Already famous in the world, Haymaking on Rajac actually presents gathering called Moba and celebration of the end of mountain meadows mowing. It very often recalls in an attractive way, an old custom of Moba for finishing a very important and large work of a host. The central event is a competition of the best mowers on the mountain Rajac medows, together with a traditionally good cultural-entertaining programme, traditional dancing and exhibition of agricultural mechanics. Landladies serve the guests – lunch-carriers, and the mowers are dressed in national apparel, with hayhats and embroider, colorful bags on the shoulders. In the end of haymaking, they pronounce the most skillful one, and as the hosts say, the most notable to be a Hero or Kozbaša. This person shall lead the mowers on the following haymaking. In this three-day manifestation, around 50,000 people stay on Rajac.