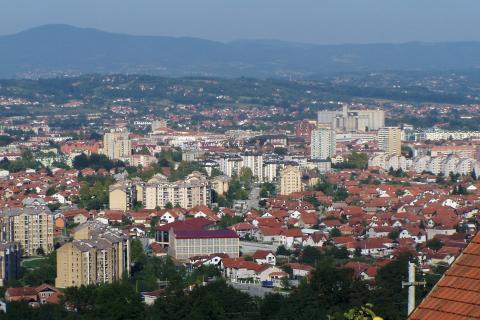 turizamcacak.org.rs
Description:
Čačak is the city on the river West Morava, surrounded by the mountains Jelica, Ovčar, Kablar and Vujin. It is located on the Ibar highway, 144 kilometres from Belgrade. When approaching this area, you simply cannot miss the urban core of the city of Čačak. In the place of the today's city, there used to be a settlement in Roman period as well (4th century), which the remains of Roman thermal baths and monuments to Jupiter witness about. Within the municipality of Čačak numerous villae rusticate had been discovered, agricultural fields also dating from the Roman period. Mansion of Јоvan Obrenović in Čačak, after the church, it presents the oldest preserved building. It was built in 1835 by Jovan, a brother of Prince Miloš. It holds the only preserved emblem of the Obrenović dynasty, and has a museum exhibition of the ancient city house. The National Museum has three permanent exhibitions – display of historic period from Neolite to Middle Ages, "Оvčar-Kablar monasteries and churches of the Čačak district", as well as "Čačak area during the uprisings and wars between 1804 and 1941". Many ancient houses in this place preserved their original look – Okružno načelstvo, Sokolski dom, High School, Hadžića kuča, Dragomirović Palace, the House of Major Gavrilović… The Gallery of Nadežda Petrović presents a memory to a painter, originator of modern visual arts in Serbia, as well as the Memorial "Nadežda Petrović" one of the most important manifestations of modern visual arts of Serbia. Monument to the four religions on the graveyard in Čačak was built in 1934 and is a unique one in the world. On one side there is an Orthodox cross, on the second one the Catholic cross, on the third one the Islamic crescent and on the fourth one the David’s star. The monument to Tanasko Rajić on the Hill Ljubić keeping the memory of a legendary warrior who died defending Serbian cannons from Turks in the First Serbian Uprising. Gradina, the top of the mountain Jelica, 8 kilometers from the city centre of Čačak, in the village of Grab, is famous for the archeological locality of large proportions. There, the remains of early Byzantine fortified city can be seen, witnessing the developed economic and cultural life in this area since 6th century. In Оvčar-Kablar Gorge, where the West Morava River is passing through, ten kilometres from the Čačak city center, there are 10 Orthodox monasteries and two Holy places. With great certainty, it may be said that they had been built at the end of the 14the century, during the period of the monks’ hesychas coming to Serbia. People call this area Serbian Holy Mountain. Today there are the following monasteries existing - monastery of the Entry into the Temple, Holy Ascension, Transfiguration, Sretenje and Holy Trinity on the right, as well as Annunciation, Ilinje, Jovanje, Dormition and Nikolje, on the left river bank of the Morava river. Besides the monasteries, there is also a Refuge-church in Kađenica and Savinje – a church dedicated to St Sava. They together belong to and represent renesanse of Construction School in Raška regarding architecture. They included workshops for copying and illumination of books, icon painting and crafts of various objects used for divine service. Mountains Ovčar and Kablar are ideal for those who go in for fishing, mountaineering, rafting or extreme sports. On Kablar, even some courses for extreme mountaineering have been organized, while a must-do is an airfield for paragliding on the top of the mountain Ovčar. Čačak has water springs in three spas. Ovčar Banja spa, besides thermal waters offers opportunities for an active vacation. It provides wellness centre services, but at the same time enjoying in natural attractions. Ovčar-Kablar Gorge belongs to an area with exceptional features, with various flora and fauna and rich monumental heritage. Аtomska Banja Gornja Trepča is, for the therapeutical value of its healing waters, famous even accross the borders of the country. Thermal-mineral waters of this spa are slightly radioactive, and among other elements they consist of rare microelements, which is the secret of its healing effect on many tourists coming there. Mild climate, lush vegetation, fresh mountain air reaching the tops of it, refresh, heal and bring back life energy. Atomska Banja is close to numerous cultural-historic monuments, which besides its importance of being a centre of health tourism, is classified as an interesting and attractive place for a holiday. Every year, Čačak organizes over 30 various cultural and sports manifestations. Of course, the most important is manifestation Disovo proleće (Dis spring), held every May, in the honour of a poet Vladislav Petković Dis and poetry. Throughout its decades-long lasting all the important poets of 20th century have participated in it.
Audio record: