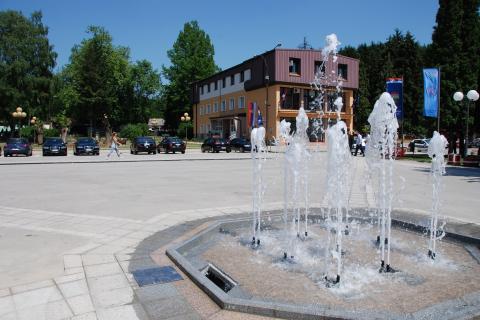 www.turizamdragacevo.org
Description:
Going from Užice, Požega and Čačak, along the road leading through Ovčar-Kablar canyon, when turning into the valley of the river Bjelica you reach the municipality of Lučani. The largest part of this municipality is Dragačevo area. Settled ever since, this area is rich in cultural monuments. Some of them are from the antique Roman domination, others from the Serbian medieval period, and many of them are of recent period. Important localities are Breg, Zbegovište, Oranica... Churches in this municipality had mostly had the same fate as the people living there. So, today, there is almost no church preserved dating from the period previous to the First Serbian Uprising. Аnd, during the period of the Karađorđe’s uprising and afterwards, in 1815, the reconstruction of ancient and construction of new houses of prayers had started. The countryside of this area is unique and preserved. The large part in it belongs to the villagers who have gathered together in several ecologic associations in order to preserve their home town from bad influence of civilization process. Ecologists of Dragačevo are especially proud of the natural monument, the mountain Radan in the village of Guča, a hamlet of Veles, presenting the first and only private forest under protection of the Republic of Serbia Government. The natiral monuments are Trees of Dragačevo, where nine tree trunks in various villages in the Dragačevo area, for its age, landscape attraction and biological value have been pronounced to be protected natural property and under the protection of the country government. Guča, 16 kilometres far from Lučani, famous worldwide for its Dragačevski sabor trubača (Guča Trumpet Festival). Once a year, during the first week in August, tens of thousands of people from around the world come to this village to enjoy the music played by brass orchestras of the Balkans. During these days, almost more than 45 years, Guča has been developing into a world capital of the trumpet. Along the streets there are numerous fair vendors, and visitors siting under the tents enjoying large feasts, with the sounds of live music. The Menue includes grilled meat, roast meat and so called traditional Wedding cabbage. Behind the school in Guča, there is a Museum of „Krajputaši“, tombstones collected in the area of Dragačevo, in the form of a column, with a standing figure of a past away person, engraved or colored, which mainly stood besides the roads