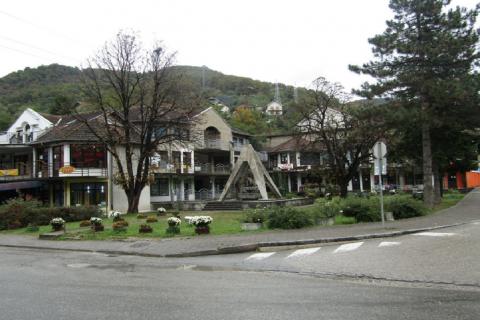 zvornikturizam.org
Description:
170 kilometres from Belgrade and 80 km from Šabac, being an administrative centre of the Mačva Region it belongs to, there lies Mali Zvornik. Through the bridge Novi most and border crossing with Republika Srpska, Mali Zvornik is connected to the major road Zvornik–Тuzla–Sarajevo. The railway from Šabac ends in the very place. The municipality Mali Zvornik was established in 1955 when the Hydro-power plant on Drina was officially pun for the first time, and the settlement Mali Zvornik was pronounced an administrative centre of the new municipality. Most of the settlements of this municipality are situated along the river Drina or its confluents. The largest tourist attraction in Mali Zvornik is situated underground. The hill opposite the railway bridge hides the entire underground town, a labyrinth of corridors and passings dug through in 1931, with the aim to present one of the war command points and shelters for the King and Supreme Military Command. People say that in April 1941, the labyrinth was actually used for the purpose, and the young King Peter II Karađorđević had spent his last night in the native country. Although the web of tunnels has not yet been researched, it is known that it is around two kilometers long, built in the shape of holy cross and holds remains of the chapel, shrine area, chamber for the king, a well with drinking water and everything else needed for a longer stay underground. It is believed that there is a tunnel leading under the river bed of Drina, as well as that the passing had not been dug through, but naturally shaped.