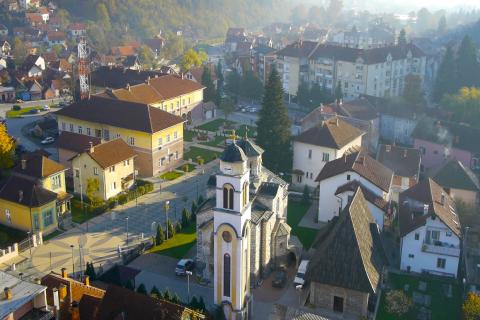 www.tookrupanj.org.rs
Description:
Krupanj is located in the West Serbia, and lies in a valley, surrounded by mountains Boranja, Jagodnja, Sokolske planine, Vlašić and river Jadar, in the surrounding known as Rađevina. In the north-west it adjoins the municipality Loznica, and in the north it neighbours the municipality Šabac. It may be reached from Belgrade through Valjevo or Šabac, and it is 150 kilometres far from the capital city. Because of the altitude at which it is situated, this microregion has a specific climate. Even during the summer, nights are cold, and there is much more precipitation than in the neighboring municipalities. In Rađevina, there is no industry, so air and water are perfectly clean. Due to this, the healthy food production is not only a buzzword. Although not a large one, Krupanj had a very turbulent history. In the Second World War, in the nearby village called Bela Crkva, during the fair Ivanjdanski vašar, Žikica Jovanović Španac had called people to the uprising against the invaders. Throughout decades, this date, 7th July, has been celebrated as a Day of Serbian Uprising. On the summit of the mountain Jagodnja, named after being rich in forest strawberries, there is a famous Mačkov kamen (923 m), the arena of the bloodest battle in 1914. On the highest point there is a memorial ossuary built in the memory of the soldiers who died fighting in the battle. In Krupanj, in the Church of Holy Ascension, built in 1932, there is an ossuary of the soldiers who had died at the battle of Mačkov kamen. Besides for its historical importance, Mačkov kamen, attracts tourists being a winter sport resort. It has ski paths with a ski-lift and sledging poligon. Fishing and hunting, at even four rivers in the municipality of Krupanj, present a regular touristic offer in this region.