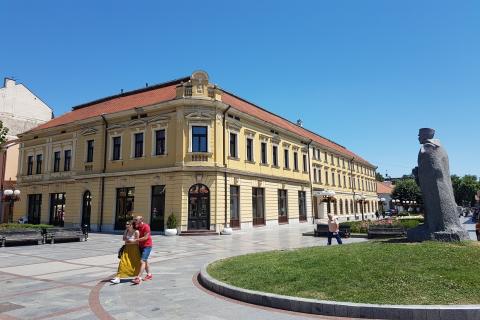 tov.rs
Description:
In the south-east from Belgrade, on the 95th kilometer along the major road Е 760, on the river Kolubara, there lies Valjevo. This city was developed on the ancient trade route from Belgrade towards Bosnia, under the spurs of the mountain Medvednik, Povlen, Jablanak and Maljen. The centre is recognizable after the monument to Duke Živojin Mišić, a famous army commander from the First World War where the central square is also called after him. On the Square, there is a National museum in the building built in 1870. On the other side of the river Kolubara, there is an old downtown Tešnjar, built in Serbian-Balkans style during the 18th and 19th centiry. Until the First World War this square was the most important part of the town, where today, this part of the city is living a life with new content – cafes, restaurants, boutiques... "Теšnjar evenings“ and traditional "Jazz festival" are just two of many excellent cultural manifestations held in this sound cultural centre. Yet, the oldest building in Valjevo is Muselim’s Residence. It was built in 18th centiry, and now holds a permanent exhibition dedicated to the First World War and Second Serbian Uprising. It has got simple architecture and presents rare remain of Turkish construction engineering. 12 kilometers from the center of Valjevo, there is a village Brankovina. In this village the whole old complex was kept with a school and church. It had gained its fame during the dramatic events in the 19th century, and especially being a place of birth and home town of a series of persons crucial for the Serbian culture. It is related to the Nenadović family, a notable family from the period of Serbian revolution. The Nenadovića tower was built in 1813, in the vicinity of Valjevo on Kličevac by Jakov, a brother of the killed duke Aleksa Nenadović. Seven kilometers from Valjevo, there is a world famous monastery Ćelije from the 14th century. In the district there are several monasteries from the 15th and 17th century. The closest and most visited picnic ground of the people living in Valjevo is Petnica, five kilometers far from the city. In the Cave of petnica there are numerous archeological finds, as well as fauna remains from the Ice Age. Petnica has an accumulation lake suitable for fishing, as well as a sports and recreational facility with four swimming pools in the open air. Also, Petnica is famous for its "Science center for young researchers" which exceeds the scope of regular school curriculums regarding interests. The river Gradac, with its confluents, presents one of Valjevo's wonders. There are a lot of watermills and fish ponds, and it is extremely rich in fauna. In the south of Valjevo, there lies the mountain Maljen (1108 m), famous for its blooming fields, which have their special decoration of white daffodil. There is a manifestation dedicated to this flower being held every July on Maljen. On the mountain there is an air spa and picnic resort Divčibare. It is rich in spring and running waters, where a special attraction is the Skakalo waterfall on the river Manastirica. On this mountain, as well as on others in the surrounding of Valjevo, there are good mountain homes to be visited. Villages in this municipality are typical Šumadija villages famous for their original duvan čvarci.
Audio record: