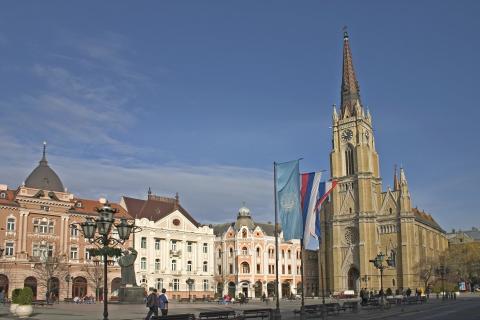 www.novisad.travel
Description:
Its architecture and spirit have been shaped by many a nation. Easy-going and surrounded by fertile lowland, Fruška Mountain and the Danube, the capital city of Vojvodina is a pearl amongst the Serbian cities. It is also called the ‘Serbian Athens’, the Danube River Gibraltar and is home to south-east Europe’s largest music festival, EXIT which has earned a global reputation for its diversity and cutting-edge music. The Fortress of Petrovaradin, with its monumental architecture, its underground galleries and miraculous maze of tunnels, is one of the symbols of the city. From the Clock-Tower plateau, one can have a panoramic view of Novi Sad and the Danube. Within the compound, can be found the City Museum, the Planetarium, and a line of art ateliers. The Lower Town of the Fortress, with its narrow streets and baroque edifices provides a very different ambience. Amongst the prominent constructions, there are: the Monastery of St. Juraj, the Belgrade Gate, the Church of St. Peter and St. Paul, the City Hall, the Military Hospital, the house where Viceroy Jelačić was born. The city centre is dominated by the edifice of the City Hall, the catholic Cathedral of Mary’s Name and the monument of Svetozar Miletić. Next to the Cathedral, in the churchyard, there is a valuable edifice of “Plava banija” (Eng. Blue Banovina) and also the City Cultural Centre. Zmaj Jovina and Dunavska streets, with the houses’ and palaces’ facades of different colours, a network of side streets and passages, represent the most picturesque part of the pedestrian zone of the city. There is also the Bishop’s Palace, the Orthodox Cathedral Church of St. George and Zmaj Jova High School. The green island of the city – the Danube River Park - continues to Dunavska Street. On the very brim of the park, there is the Museum of Vojvodina; the Museum of Contemporary Art and Permanent Natural History Exhibition are in its vicinity. At the square named after great benefactress Marija Popović Trandafil, there is her legacy building serving as the principal seat of Matica Srpska, which is the oldest Serbian cultural institution. Matica Srpska is home to three million books, manuscripts, chronicles, collections of works… and an extraordinary collection of portraits of famous citizens, amongst which is the portrait of Marija Trandafil. In the very vicinity, there are the famous Nikolajevska and Almaška churches. Located at this small square, there are three precious gems of the city one next to another: Matica Srpska Gallery, the Pavle Beljanski Memorial Collection and the Rajko Mamuzić Gift Collection. At the Matica Srpska Gallery, there is an exhibition of national art dating from the 16th to the 20th centuries. Pavle Beljanski, a diplomat and passionate art collector, gifted the nation one of the most significant collections of the Serbian paintings in the first half of the 20th century, and collector Rajko Mamuzić gave as a gift the works of the first post-war generation of artists. The Synagogue of extraordinary beauty serves to remind us of the large Jewish congregation, who tragically died in the Second World War. Today, the Synagogue is an elite city concert hall. There are special tourist programmes designed to make tourists familiar with the rich heritage of the Jews of Novi Sad. The new edifice of the Serbian National Theatre is also located in Jewish Street and today is a Theatre Square. The street of cafes and clubs, which is named after a great Serbian actor – Laza Telečki, has become synonymous for good entertainment. The ‘L.T. Zone’ is a popular meeting and entertainment place to experience the city’s nightlife. The city prides in its Strand, a well-arranged sandy beach with a view of the Bridge of Freedom. Facing the beach, there is a green oasis of the Fishermen’s Island – the point where those who enjoy fishing and navigating come. The quay with a view of the Fortress is the urbanized part of the bank. At the quay there is also one of the symbols of the city – “Family” monument, memory to the World War Two civil victims. The Fruška Mountain National Park is a city resort where people like to go and relax and take in the scenic beauty. Although the majority of the monasteries in Fruška Mountain are situated on the territories of other municipalities, Novi Sad is the centre from which to sightsee at the “Northern Holy Mountain”. On the northern slopes of the National Park, the nearby monasteries of Beočin and Rakovac, as well as a monastery on the territory of the city – Kovilj, are worth paying a visit too. Apart from a selection of international menus, the gastronomical “story” of the region of Bačka is connected with the Danube csarda restaurants and its farms. At csarda restaurants, river fish and fish soups are prepared. On farms, a Bačka lunch is eaten slowly and easily. To begin with, the menu offers you quince brandy, followed by soup and cooked meat and vegetables topped with sauce, then the main dish, and finally, poppy strudel, dumplings, pumpkin pies… There are also dishes prepared with the famous cabbage of Futog. To accompany such dishes from the menu, there is a wide choice of wines produced on the wine-growing hills of Fruška Mountain.
Audio record: