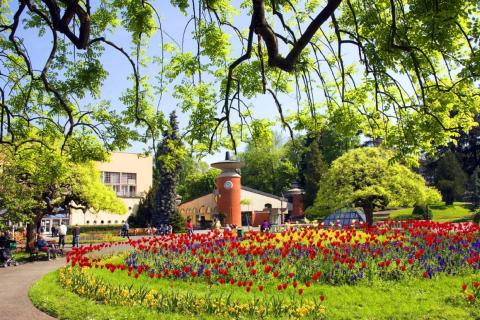 www.vrnjackabanja.co.rs
Description:
The most famous spa and the spa with the longest tradition, Vrnjačka Banja Spa, is located 195 km away from Belgrade. The spa can be reached from the capital city by the main road E 761 or E 75 (to Pojate). From the beginning of July to the end of August, you can also visit this beautiful place at the foot of Goč mountain by train – “The Romantika”, pulled by a steam locomotive. There are no written documents about the time when Vrnjačka Banja Spa started being built for the first time, but on the basis of the material found, it can be said with certainty that the mineral waters of Vrnjačka were used as early as in the ancient period. As early as in 1924, parts of the bathing pool and the old Roman spring – the Fons Romanus – were found here. In the same place, about 500 Roman coins, several of which were also from the time before Christ and the largest number of them dating back in the period from the 2nd to the 6th centuries, were found. The Roman name of Banja (Spa) is unknown, and the name it has today was given it after the name of the village of Vrnjci, in whose territory the mineral springs were discovered after all. Some legends tell us that the medicinal quality of the waters of Vrnjačka was also known and used in the time of the later Turks’ reign. According to the legends, Turkish landowners sought a cure in Vrnjačka Banja Spa, requiring that local people feed and serve them. In order to avoid serving beys, the people covered the springs with earth. The Spa flourished in the time of Prince Mihailo, when officially the first season was opened in 1867, and Vrnjačka Banja Spa became an elite summer resort. In the late 19th century and at the beginning of the 20th century, numerous villas were built around the warm spring and on two neighboring hills. Today, those buildings are Banja’s pride. So, the court of the royal commissioner Belimarković (1886), built in the style of the field villas of Northern Italy, serves as a cultural center and a gallery today. It is also known as the Castle of Culture. The houses located on Čajkino brdo (Čajka’s Hill) are of pronounced beauty. On the very top of this elevation, there is a small church built by priest Jeftimije Popović in 1856. As a great admirer of Banja’s beauties, he opened the first spring in the same year as well. The trademark of Vrnjačka Banja Spa is a sparrow with peasant footwear (“opanak”) and a traditional peasant cap (“šajkača”) on its head. The sculpture of the sparrow is in the very center of Banja Spa. Taking photos there is almost part of an obligatory ritual performed by every visitor who comes here. Apart from the sculpture of the sparrow, there is also a sculpture of a young girl. In Vrnjačka Banja Spa, there are seven mineral springs. The four springs are used for therapeutic purposes, whereas the two of them are bottled as table mineral water. Warm water is the oldest and the most heard-of spring of mineral water; judging by accidental archaeological findings, it was used in the Roman period from the 1st to the 4th century. The temperature of the water at this spring is equal to the temperature of the human body, 36.50C. Jezero (Lake) is also registered as a warm spring, whereas Snežnik (17.50C) and Slatina (140C) are considered as cold mineral springs. The water of these springs helps cure diabetes, gallbladder diseases, many diseases of the digestive system organs etc. Throughout the year, especially during the months of the summer tourist season, Vrnjačka Banja Spa offers its visitors an extremely rich and attractive cultural-entertaining program. The Film Script Festival, focused on the current annual national production, is held in August every year. During the month of July, “The Carnival” takes place in Vrnjačka Banja Spa. Then, apart from the processions walking about the town, various competitions, sports encounters, masquerade balls and entertainment programs are also possible to see. This event is thought to attract over 200,000 visitors every year. During each season, The Cultural Festivities of Vrnjačka Banja Spa are held; The Day of Those Fallen in Love is celebrated on the Bridge of Love, when young people compete whose kiss will last longer. Vrnjačka Banja Spa offers more than 15,000 beds, of which about 4,500 are in its hotels, board-and-lodgings and suite centers; 850 are in its health-care centers and about 10,000 are in private households.
Audio record: