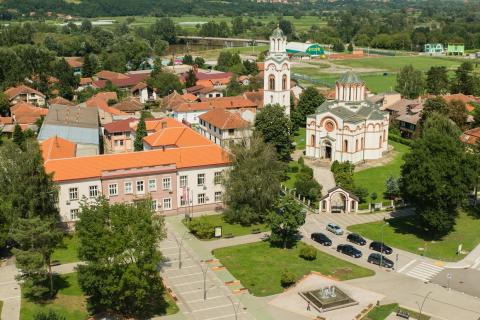 www.turizamtrstenik.rs
Description:
Trstenik is a place in central Serbia, on the Pojate-Kraljevo main road, 205 km away from Belgrade. The town itself is located in the place where Moravian roads connecting this region with Kruševac, Kraljevo, Vrnjačka Banja Spa, Župa and Levač pass and intersect. The Stalać-Kraljevo railway road passes through the town, through the valley of the Zapadna Morava (West Morava) river, and there is a small airport in its immediate vicinity. The town of Trstenik has built its reputation on farming as its source activity, with few public and cultural goods, but on the beautiful, rich and rewarding soil of the West Morava river. The Morava and the fertile soil around it, extraordinary natural, climatic and ecological conditions were the backbone of the accelerated development of this region. Before the war, Trstenik was known as the town of craftsmen, traders and coffee-house keepers; after the war, during the general industrialization of the country, the town was faced with stormy economic development. In the center of Trstenik, there is the Church of the Holy Trinity, built from 1898 to 1900. It is the first church in Serbia to have been built in the Neo-Moravian style. Its similarity to the King Milutin’s Church in Hilandar is noticeable. The old core of the town of Trstenik is one of the best preserved in Serbia. The House of the Katić Family is the oldest preserved building of the mid-19th century and is considered as one of the most beautiful houses of Moravian Serbia. Inside the ground floor of the house, there is a national ethno-restaurant. The Museum of Trstenik is interesting for its permanent ethnographic setting. The Legacy of Homeland Artists in Trstenik is a repository of homeland creators, who will permanently testify to the possible and successful cooperation between the economy and culture. In the surroundings of Trstenik, there are two mediaeval monasteries, the princesses’ two legacies, dedicated to The Most Holy Mother of God. The Monastery of Ljubostinja, originating from the end of the 19th century, is known for the ktetor’s frescoes of Prince Lazar and Princess Milica, in actual size, as well as the frescoes of their sons Stefan and Vuk. For centuries, Ljubostinja was the cultural center of the region. The famous “Eulogy for Prince Lazar”, embroidered on silk by Jefimija, the first Serbian poetess, was written in the monastery. Inside the church, there are ktetors’ tombs of Princess Milica and Jefimija. In this monastery, in the second half of June, the poetic Jefimija’s Days are held. The Monastery of Veluće is the oldest preserved monastery of the Moravian School. In the past, the monastery was called Srebrenica, after the river of the same name and the region abounding in ores. Even today, you can come across some searcher for gold and silver on the banks of the Srebrenica river. Around the town of Trstenik, there are brightly painted villages that you certainly have to visit. The village of Brezovica, on the slopes of Goč mountain, offers, say, numerous possibilities for recreation. Since recent days, the hunt reserve has been opened. The village of Veluće is known for its delicious roast pork and lamb. Nature endowed this village with a spring of mineral water, whose quality meets the world standards. Trstenik and its surroundings can be seen from the air, too. This opportunity is offered by local air-clubs and more information is available at the local Tourism Organization.