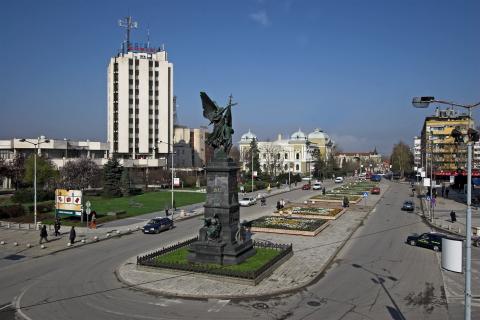 www.turizamkrusevac.com
Description:
Kruševac is located 194 km away from Belgrade. It is reached by the Belgrade-Niš highway, with a turn near Pojate (23 km away from the town). In the east, the town borders with Aleksinac and Merošin; in the south – with Blace, Prokuplje, Brus and Aleksandrovac; in the west – with Trstenik, and in the north – with Varvarin, Ćićevac and Ražanj. It is a mediaeval capital, a town of rich tradition, located in central Serbia at the crossroads of the roads cutting through the Balkans since times long gone. It is the center of Rasina District. According to the legends, the town was named after large amounts of pears which this town abounded in or after the large Moravian pebble stone, “krušac”, which was used for building the fortress that exists today, too. The Turks called the town Alacahisar (the colorful town). Kruševac is known for its Archaeological Park, which consists of the thick walls of the mediaeval town of Prince Lazar’s, the Lazarica Church and the National Museum. The town was built by Prince Lazar in 1371, as the capital town and a military fortification. The Lazarica Church, which is also part of this compound, is a court church, and its construction was the beginning of the Moravian School of Architecture. The façades of the church were rekindled by various means – the alternating layers of stone and brick, mullioned windows, decorated with reliefs, rosettes and red-and-black chessboard squares. Since the frescoes have not been preserved, the walls inside the Lazarica church are completely empty. The church is considered as a masterpiece of the Serbian Ecclesiastic Architecture. In the vicinity of the church, there is a half-destroyed, but yet still imposing, 15-m-high defensive tower. Not far away from the tower, there is the building of the National Museum, which is said to be the second most beautiful building in Serbia. In the museum, there are rich collections illustrating the history of the town and the surroundings. The collection’s most precious exhibit is Prince Lazar’s ceremonial garment. At the foot of the mediaeval town, there is the small town lake from the 19th and the beginning of the 20th century. The center of the town is dominated by the monument to the heroes of Kosovo, made by sculptor Djordje Jovanović. In the building of today’s Town Administration, there is a mosaic of extraordinary beauty, made by academic Mladen Srbinović, dedicated to the mediaeval, Moravian Serbia. The Monastery of Veluće is located on the southern slopes of Goč Mountain, 22 km away from Kruševac. The monastery was established by noblemen brothers, all of whom are painted on the walls of the church. Quite attractive events are organized in Kruševac, such as: The Festivities of St. Vitus’ Day, near the end of June, and the Cultural Summer, throughout the summer. In the town, there is a long tradition of theatrical art, and today’s National Theater is one of the most reputed in the country. At the traditional Theater Days, theaters from all parts of the region gather together. The people from this region are said to be joyful and with quite a sense for humor. Every year, the Golden Halmet, an international festival of humor and satire, is held here.
Audio record: